THOMASVILLE, GA. —  Among ambitious objectives A. Ryals McMullian set for himself when he was named the seventh chief executive officer of Flowers Foods, Inc., Thomasville, Ga., gaining the confidence of the investment community ranked high.

It was May 2019, and the company was coming off a period in which it consistently was falling short of its own financial results guidance.

“There was a period where we were announcing guidance, we’d miss it, have to reduce guidance in the middle of the year — there was maybe a little bit of a credibility issue starting to crop up,” he said. “So, when I came into the role, I was intent on rebuilding our credibility with the analyst and investor community. We adjusted our long-term financial targets, held an investor day where we very clearly laid out our strategies, and we were intentional about improving the quality of our discussions with the Street and our investors.” 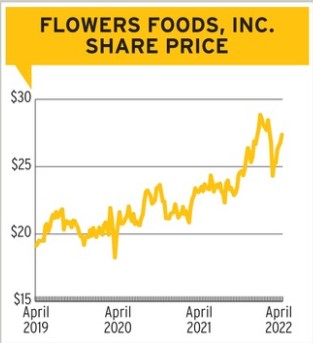 Mr. McMullian is pleased with the progress Flowers has made communicating with investors and investment analysts as a tandem team that includes him in concert with R. Steve Kinsey, executive vice president, chief financial officer and chief administrative officer.

“It took us a little while to build back some credibility with the investment community, and I think the way Steve and I interact on the calls works really, really well,” he said. “Steve is very much in command of his facts. I am very much in command of my facts. We’ve been able to articulate our strategy to our investors. And we’ve seen that credibility really start to build, particularly as we have consistently met our stated goals.

“That doesn’t mean you’re not ever allowed to stub your toe, from time to time. Things happen in business. Challenges do crop up, but we are confident in our ability to consistently achieve our long-term goals and thus far we have certainly demonstrated that capability.”