“The strength of our portfolio is evident, as we more than offset the sales and cost impact of supply recovery in North America cereal with sustained momentum in snacks growth around the world,” said Steven A. Cahillane, chairman and chief executive officer.

While North America was the company’s weakest region globally, Mr. Cahillane was pleased with its performance in the quarter.

“The team has done an excellent job of quickly restoring and ramping up production in our US cereal plants following the fire and strike of last year’s second half,” Mr. Cahillane said in a May 5 conference call with investment analysts. “Our inventory is gradually building toward normal levels as planned, enabling us to start replenishing retailer inventories earlier than expected in the first quarter.”

Still, it was the company’s snack business, fueled by price realization, that has been the company’s engine for growth in the United States and globally, Mr. Cahillane said.

“Our largest portfolio segment, the developed market snacks, continued to generate strong growth led by world-class brands like Pringles, Cheez-It and others,” he said. “And our emerging markets collectively sustained double-digit growth. So even in a quarter when one of our businesses, North America cereal, was notably soft, declining 10% year-on-year because of a lack of inventory, this was more than offset by momentum in the rest of our portfolio.”

Regarding pricing, Mr. Cahillane said, “In an environment in which cost inflation is too high to cover with productivity alone, we have leveraged our enhanced revenue growth management capabilities to realize price effectively. We’ve been realizing price ever since cost inflation began to accelerate back in the second half of 2020, and we have accelerated as the market-driven cost inflation worsened.”

Overall, organic net sales growth was 8% in Europe, 6% in Latin America and 17% in AMEA (Asia, Middle East and Africa).

“These are exceptional growth rates,” Mr. Cahillane said. “And in North America, where last year’s fire and strike left us with low cereal inventory, and therefore, lost sales, our reported and organic net sales were still only down less than 1%. In fact, if you exclude cereal, the rest of our North America business grew by 3% to 4% year-on-year, even against tough comparisons.” 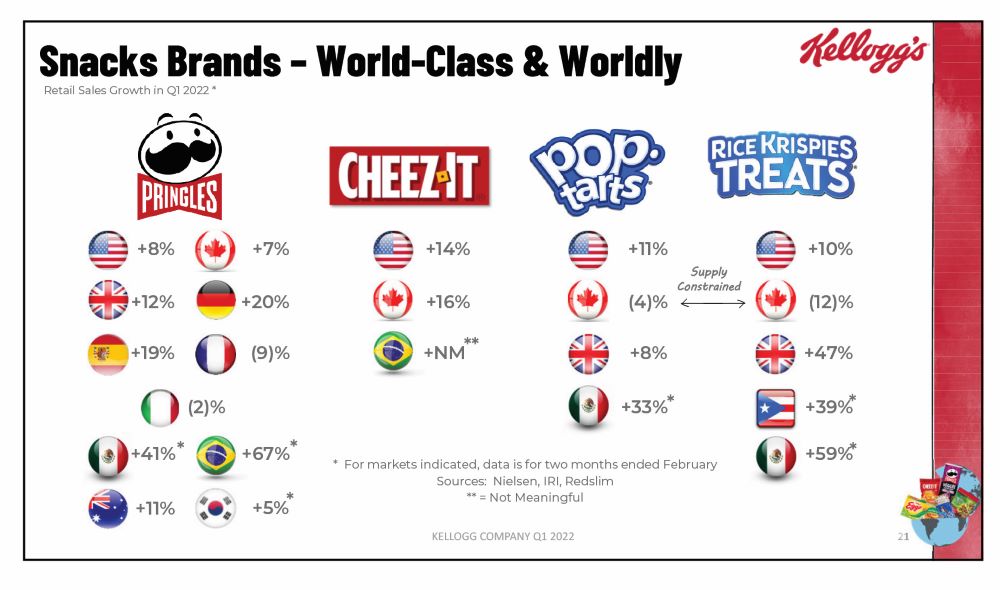 First-quarter operating profit of the North America business of Kellogg was $345 million, down 11% from $379 million in 2021. Sales were $2.11 billion, down 0.9%. Breaking down the sales change, Kellogg said volume fell 8.3% while pricing/mix contributed 7.4% positively to quarterly results.

While the company’s cereal business lagged because of supply constraints (low inventory levels because of the 2021 fire and strike), snacks sales were up 5% in the quarter. Mr. Cahillane said consumption grew faster than sales, up 8% during the quarter for Pringles alone (after growing double digits a year earlier).

To demonstrate progress in restoring its cereal business, Mr. Cahillane displayed a chart on the analyst call showing the company’s market share bottoming out around 23% in January from around 28% before the strike. Since then, share figures have risen steadily, approaching 27% at the end of the quarter. He said this progress represented the best lens for viewing the underlying health of the North American cereal business.

“If you look at year-over-year performance and share in US cereal, clearly still down, but that’s based on low inventories and lack of commercial activity,” he said. “But when you look at the sequential performance of the business, our goal is each and every week to continue to build our TDPs (total distribution points) and each and every week to continue to accelerate our share momentum and get back to where we belong because the brands are still incredibly strong, relationships with retailers continues to be very, very strong, and we’re working together to get this business back to where it belongs.”

Mr. Cahillane completed his remarks about North America with an update on new products. He said Cheez-It Puff’d was enjoying a stronger launch than its successful Cheez-It Snap’d platform launched a couple years ago. He also highlighted Club Crisps in its cracker business and Pop-Tart innovation, including  a new flavor, Snickerdoodle; a line called Pop-Tarts Simply, with simple ingredients; and the return of a “fan favorite,” frosted grape. He also noted pending innovation in Eggo and MorningStar Farms.

Also during the call, Mr. Cahillane drew attention to the remarkable growth of the company’s snack brands globally and the sustained strength of its business in Europe.

He shared a slide showing the Pringles brand grew at double-digit rates in numerous global markets with strong Cheez-It growth, too.

“Pop-Tarts continues to grow in the US, but look at its growth rates in markets like the UK and Mexico as well,” he said. “Rice Krispies Treats is enjoying explosive growth in several markets outside of the US as we put more focus and support behind that unique brand. Not only are these brands continuing to grow in North America, but this chart can give you a glimpse of their international potential. Aside from Pringles, these brands are in very early days of expansion, which is part of our strategy. And their growth rates speak to their long-term potential.”

Mr. Cahillane said the business in Europe has been performing well for four consecutive years, demonstrating that its results are not an anomaly.

“There are not too many businesses like ours that talk about Europe as a growth driver to their company, but it is for us,” he said.

He also acknowledged challenges in Europe, beginning with the war there. He said Russia and Ukraine account for less than 1.5% of total company net sales and less than 10% of our sales in Europe.

The company has suspended shipments and investments into Russia. The effects of this suspension will be felt beginning in the second quarter. The difficulties extend beyond the lost sales to Russia, he said.

“Clearly, it’s a more challenging environment now,” he said. “We’re seeing inflation in Continental Europe. You haven’t seen that in a long time. What was typically a deflationary environment has shifted. So clearly, that will have pressure on the consumer. But what we’re seeing right now is, obviously, that’s pervasive everywhere. And so it’s not just at the grocery store. Just like in all parts of the country, it’s wide ranging. And the fact that we are in the types of business that we’re in is a good place to be in an environment like this. And when you have strong brands inside of that, it’s an even better place to be. So we’re very confident in the European performance continuing to be strong.”

With its global footprint, Kellogg operates in numerous markets reliant on imported ingredients from Russia and Ukraine. These include a rapidly growing noodles market for Kellogg in Africa (noodles are a popular breakfast food in Africa) through its joint venture established in 2015 with Tolaram Africa.

“There’s clearly a lot of wheat that comes from Russia and Ukraine, and they’ve pivoted to all around the world to get supplies to replace that, and they’ve done that very effectively,” Mr. Cahillane said. “And that’s really across the world. And so they’ve got line of sight to good product production. They’ve got line of sight to meet our noodles forecasts for the remainder of the year and even into next year.”

Updating guidance for the year, the company raised its outlook for sales growth to 4% from 3% while reaffirming earnings per share growth at 1% to 2%.

“The single largest driver of our gross profit decline was a transitory impact of the fire and strike we experienced in the second half of last year,” Mr. Banati said. “This impact reflects not only lost sales year-on-year, but significant costs as well.”

He said because of supply constraints, advertising and promotion investment was much lower than usual in the first quarter and that this spending will be “restored gradually across the year in line without recovering supply.”

Other comments by Mr. Banati included the observation price elasticity was becoming evident once again in several markets but was below historical levels. Additionally, he said that in the company’s revised guidance, the company raised its built-in figures both for inflation and costs associated with supply disruption.

Asked by an analyst, Mr. Banati said the inflation estimate started in the mid-teens and moved up two to three points.