We use cookies to provide you with a better experience. By continuing to browse the site you are agreeing to our use of cookies in accordance with our Cookie Policy.
Skip To Content
Home » Sanctions, tariffs, weather ‘a perfect storm’ supporting fertilizer prices

KANSAS CITY — Inputs designed to increase crop production, yields, and quality are not immune to volatility and high prices, the two common threads linking all 21 sessions comprising Sosland Publishing Co.’s 45th annual Purchasing Seminar in early June. For the first time, a breakout session at the seminar was devoted specifically to fertilizers with an outlook that prices will remain elevated for some time.

Andy Spahr, vice president of wholesale with The Andersons, Maumee, Ohio, educated attendees in Fertilizer 101, addressed the impacts of Eastern European fighting on the fertilizer market and issued a price outlook. 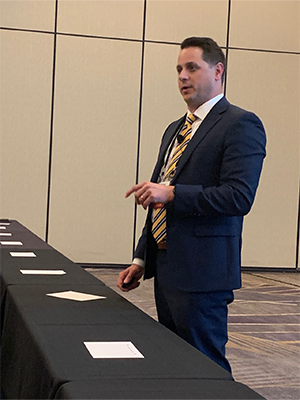 “As this market’s gotten crazy, people have realized how global the fertilizer market is, the fact that we really do rely on other parts of the world, a lot of friendly and not-so-friendly places in today’s context,” Mr. Spahr said. “To make a lot of this stuff we use in North America and also globally, a lot of fertilizer production is done in places that have natural resources in the case of potassium and phosphates, and then have the economic ability to access those resources and ship them.”

The two mined materials, potash and potassium, each have industrial applications competing for supplies. Together with nitrogen, which is manufactured mainly with natural gas, they are the primary active fertilizer ingredients. (Usually) inexpensive natural gas fuels a robust domestic nitrogen market that sufficiently supplies the United States with a critical plant protein and tissue formation booster. It’s what gives recently top-dressed wheat a neon green appearance from an aerial perspective. US supplies are supplemented by imports that are a function of trade flows and arbitrage. There is interest in expanding US nitrogen capacity, but a recent Biden administration plan to ramp up US nitrogen production fell far short, Mr. Spahr said, since a proposed $500 million investment wouldn’t even cover the engineering study for a new nitrogen plant costing between $3 billion and $5 billion.

“We can make more of this in the US, build more plants if we wanted to, control more of our own destiny,” Mr. Spahr said.

Less feasible domestically is increased production of phosphate used to assist photosynthesis, plant growth and development. It’s mined from phosphate rock, processed with sulfur and ammonia in Florida and Idaho, and used in numerous agricultural, industrial and energy processes. But the resultant commodity isn’t cost competitive in the global market.

Saskatchewan, Canada, is a major supplier to North America of potash, or potassium, which fortifies crop quality as it defends crops from disease and extreme weather and has industrial applications. The major global players in potash — Belarus, China, Russia and Ukraine — supply palm-oil-producing countries, especially those in Latin America.

As the supply base for the world’s crops and the demand base for fertilizer, the value chain centers around growers, Mr. Spahr told the audience composed of buyers and sellers, millers and manufacturers of ingredients and food.  The fundamental structure of the crop side is the reverse of the fertilizer market, he explained. In the case of the former, central demand from a wide base of growers narrows as crops pass through the supply chain to a narrow end user base. For fertilizers, the commodity begins with a limited group of extractors and manufacturers who sell to a wider distributor base that spreads supplies even wider to retailers and then to the farmer or industrial user.

That narrow origin point for fertilizer “is where all the pricing power exists, especially when you start layering on anti-dumping, countervailing duties, sanctions and trade restrictions.” Mr. Spahr said. “That’s a key difference in how these markets function and part of the reason there’s so much opacity around fertilizer prices and how they work.”

Pivoting to recent market history, Mr. Spahr indicated numerous forces escalated a “perfect storm of building pressure” even before Russia began massing troops along its border with Ukraine. The US International Trade Commission in 2020 levied significant anti-dumping and countervailing duty import tariffs on phosphates from Russia and Morocco and urea and ammonium nitrate for nitrogen production out of Trinidad and Tobago and Russia. Constrained supplies were exacerbated further by a polar vortex, Hurricane Ida and sanctions against the world’s No. 2 potash exporter Belarus after the Ryanair Flight 4978 incident, all in 2021. Taking note of constrained supplies, China halted fertilizer exports.

When Russia attacked Ukraine in February, the resultant sanctions had a major impact. Russia had been the world’s top exporter of urea, ammonium nitrate, ammonia and urea ammonium nitrate, and the No. 3 potash exporter globally. The European Union shifted ammonia imports partly to the United States, further constraining domestic supply. Fertilizer jumped from 30% of the variable cost of crop production in 2020 and 2021 to about 45% in 2022, he said.

What should US producers expect in the inputs markets for fall 2022 and 2023?

“I think what it means is things will be pretty expensive as this all sorts out, and it’s not a six-month thing, it’s protracted,” Mr. Spahr said, “Moving forward, we’ll see the market adjust to the new pricing paradigm over the next period, especially if crop prices remain elevated.”