We use cookies to provide you with a better experience. By continuing to browse the site you are agreeing to our use of cookies in accordance with our Cookie Policy.
Home » Fava beans becoming bigger plant-based protein player

KANSAS CITY – Fava beans are having a breakout year in the plant-based protein category. Investments and ingredient launches have centered around the pulse, which is known for its neutral color, neutral taste and for imparting soil health benefits.

Beneo, which has a US office in Parsippany, NJ, invested $54 million in a pulse processing site in Offstein, Germany, that is expected to be completed by 2024. The site initially will focus on protein concentrate, starch-rich flour and hulls from fava beans.

“From a technical point of view, the fava bean is a very promising raw material to support manufacturers in creating appealing plant-based foods,” said Steven Gumeny, Beneo’s regional product manager for rice ingredients and functional proteins, North America. “They have a mild taste and a creamy, light-yellow color.”

Fava bean ingredients are suitable for products that fit vegan, vegetarian and flexitarian diets, he added.

“Fava bean protein concentrate is a vegetal protein that in certain applications could replace animal protein (milk, egg) as well as soy proteins,” Mr. Gumeny said. “It has shown high solubility and very good emulsifying properties. In addition, fava bean starch-rich flour is naturally high in protein and can help to boost the protein content in various applications while also serving as an alternative to wheat flour in gluten-free bakery applications.”

Beneo’s fava bean protein concentrate and starch-rich flour will be used for protein enrichment and texture improvement in meat and dairy alternatives as well as in baked foods and cereals, including gluten-free items. Protein makes up 22% of the starch-rich flour with fava beans, which compares with 11% to 13% protein in bread flour, he said.

“We have tested Beneo fava bean ingredients in a variety of bakery applications, including bread, soft-baked goods, biscuits and even pizza crust,” Mr. Gumeny said. “Most of these prototypes have been developed as gluten-free, but they can also be used in combination when plant-based or egg replacement is important.”

Beneo will source the fava beans from German farmers in the regions of Kassel and Wetterau that are certified by the Sustainable Agriculture Initiative, Mr. Gumeny said. The fava beans will be grown less than 200 miles from the processing facility. Beneo will process the raw ingredients in intermediate production facilities until the plant is fully operational. Beneo’s fava bean ingredients became available in June.

A regenerative agriculture benefit, the fava bean (Vicia faba) has one of the highest nitrogen-fixation abilities, which results in elevated levels of available soil nitrogen, said Pulse Canada, Winnipeg, Man. Pulses, which are edible seeds from the legume family, also include other beans, peas, chickpeas and lentils.

“Non-de-flavored fava beans can have beany notes or off-flavors, but ours is very creamy and mild,” Ms. Madden said. “The color is very nice and white. It’s very easy to formulate with.” 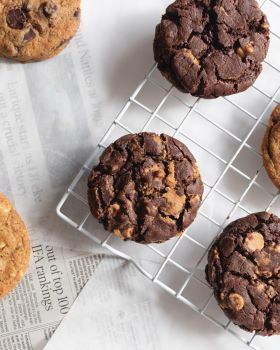 CK Ingredients FabaFuel fava protein has potential in applications that include baked foods, extruded snacks and batters/breadings as well as plant-based meat and poultry alternatives, dairy alternatives and powdered beverages.

Tannins within some fava beans negatively affect palatability and digestion, but FabaFuel is made from a zero-tannin variety. Other benefits include gelling properties, water-holding properties, a neutral flavor and a neutral color. FabaFuel may be used to reduce or replace egg white in formulations. Since it has 12 grams of net carbs per 100 grams, it may be used in keto-friendly formulations, according to CK Ingredients. Although no federal definition exists in the United States, net carbs generally refer to total carbohydrates minus fiber and polyols.

Nutris Group, Zagreb, Croatia, has opened a facility to produce plant-based ingredients from fava beans and potatoes in Novi Senkovac, Croatia, through a $31.7 million investment. Nutris.tech, a business segment of Nutris Group, produces protein isolates, starch and fiber from fava beans and potatoes and supplies food industries in North America, the European Union and Asia. Nutris and SiccaDania, a Danish company that provides engineering systems for the plant-based industry, formed a joint venture to make the investment. The two companies tested technology developed by the University of Copenhagen that will be used in manufacturing at the facility.

Roquette, La Madeleine, France, has launched a Nutralys range of organic textured proteins from peas and fava beans, which initially will be available in the European market. The textured proteins come in 11 grades with different shapes and textures.

“Available in both raw and pre-gelled forms, our beans and pulses provide diverse functionality for a range of applications, including on-trend snacks, bars and cereals, without impacting the taste, texture or appearance,” she said. “Our fava beans can also be roasted or seasoned, making them delicious additions to blends featuring extruded shapes, for elevated flavor and texture, as well as added protein.”

Fava beans’ rising prominence as a food ingredient comes as the plant-based protein industry continues to flourish. ResearchAndMarkets.com forecasts the global plant-based food ingredients market to have a compound annual growth rate of 15% from 2021 to 2030, rising to a market value of $12.34 billion in 2030 from $2.9 billion in 2020. US retail sales of plant-based foods grew 6.2% in 2021 to reach $7.4 billion, according to data released in March by the Plant Based Foods Association, The Good Food Institute and SPINS.