We use cookies to provide you with a better experience. By continuing to browse the site you are agreeing to our use of cookies in accordance with our Cookie Policy.
Skip To Content
Home » Europe drought impacts France for fifth time in eight years

KANSAS CITY — Blame it on long-term weather cycles, climate change or just plain bad luck, western Europe is suffering through a serious drought that has been centered on France. The latest Vegetative Health Index (VHI) suggests that summer 2022 will be the fifth time in eight years in which the nation has suffered through mid-summer dryness affecting production.  France is not alone in this year’s drought and relief will come slowly.

Drought has not only impacted France, but parts of Germany, the United Kingdom, Belgium, The Netherlands and Spain. Some would claim drought is affecting an even larger part of the continent. Soil moisture from the southeastern countries is as poor as or poorer than that of France, although the VHI for that part of the continent is not reflecting much of an impact on grain or oilseed production — at least not yet.

France has been at the center of interest for European agriculture ever since the early July heatwave impacted the nation and many neighboring areas. That heatwave sent temperatures to 104.5°F as far north as east-central England and over 100°F in western Germany. The heat also affected the heart of France and resulted from months of poor rainfall allowing the ground and air to dry. As the air dried out, temperatures became capable of swinging wildly whenever cool and warm air masses moved in and out of the nation.

Much of Europe was drier than usual in March, and that was the first month of significant dryness in the growing season, but reports of dryness and drought already were being received in February due to a poor winter of precipitation. May was also drier than usual, although April was a month of improved moisture for some areas and helped to minimize any concerns over the March dryness. April’s rain was better, but not good enough to fully restore soil moisture to normal. Then May came along and reduced precipitation while temperatures were warm biased in much of the continent with France reporting its first month of significantly below-average precipitation.

Interestingly, France reported above-normal June rainfall, although much of it occurred from a single event that broke down the dryness from May. It did not take long thereafter for July to deplete soil moisture again in France as temperatures rose significantly above normal. There had been previous bouts of heat in western Europe, but a huge buildup of hot air over northern Africa was pulled northward by changing weather patterns, and that is how the famous heatwave of early July evolved. That heatwave only lasted about three days, but it set the tone for the remainder of July and rainfall never again became significant enough to support crops in an ideal manner.

Falling crop health then occurred steadily through the end of July and continued to decline in the first days of August. Crop condition indices in France fell dramatically in late July and water supply became low enough across most of the nation to warrant water restrictions, raising concern for summer corn and sunflower seed production as well as many fruits and vegetable crops. Irrigation, according to France’s Ministry of Agriculture, accounts for 45% of France’s water supply usage followed by 31% for power generation and 21% for drinking water, leaving 3% for industrial use. In a serious drought, water restrictions would naturally affect crops more than other industries.

The water supply situation has affected all of France, but nearly half of the nation’s water departments were operating under a crisis status. Several key agricultural areas in France reported water usage for agriculture cut in half.

The impact of drought is most clearly demonstrated by the VHI, which is a satellite derived imagery system that assesses crop health by using a greenness indicator. Satellite images filter out certain colors and show how the greenness of agricultural areas compares to normal in an attempt to estimate the impact of drought on any production region. At the end of July, the satellite images were showing almost all of the western half of Europe experiencing some level of crop stress. 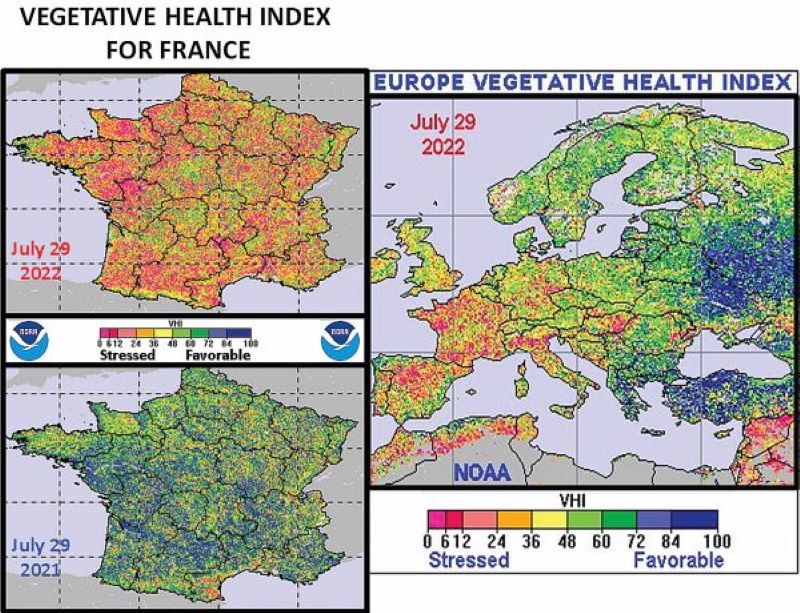 Crop stress, as indicated by the VHI, was most serious across France, northern Italy, central Spain and a few pockets in Hungary and Germany. The most significant imagery comparison was found in relation to this year’s late July index compared to that of 2021. Crops that were rated quite favorably last year are now shown to be seriously stressed. Crop conditions seem to be best in central France, where the above-normal rainfall occurred in June. The remainder of the nation was reporting some serious stress, especially in the northwest and southern parts of the nation.

This is not Western Europe’s only bout of adverse heat and dryness during the summer. In the most recent eight years, Western Europe has experienced mid-summer crop stress five times. The years 2015, 2018 through 2020 and now 2022 resulted in enough mid-summer dryness to stress crops. That resulted in some impact on grain, oilseed and other crop production. Some of those years were drier and warmer than usual for longer periods of time than the others, but still the battle with dryness has raised some serious worries about the long-term trend in weather.

The first year of the most recent series of drought years occurred in 2003 when Europe reported its hottest weather since 1540.  But Europe has some very well documented reports of long-term droughts and famine that impacted the continent in the past. So, some caution is needed to be applied before one jumps to the conclusion that it will never rain significantly in the region again. As the atmosphere warms, more moisture will be held in the air and that eventually will be rained out somewhere on the planet, and Europe will be no exception.

In the past three year’s China has reported a phenomenal amount of rain that resulted in serious flooding. The United States experienced similar conditions for a few years leading up to the start of the 2020-22 drought, and portions of Canada’s Prairies experienced serious flooding in the 2008-13 period. World Weather, Inc. believes the trend will change again in Europe and the continent, like others, eventually will be impacted by excessive rain rather than drought. For now, though, the issue is dryness and the impact of this year’s drought on Western Europe is expected to be significant — especially in France.