WASHINGTON — Frozen biscuit and breakfast maker Mason Dixie Foods shot into the national market this past year, achieving a 300% annual growth rate and evolving into a multimillion-dollar business. In 2014, founder and chief executive officer Ayeshah Abuelhiga left her job as a corporate executive in the automotive technology industry to start Mason Dixie Biscuit Co., a “clean label” Southern comfort restaurant.

In the restaurant wholesale realm, Ms. Abuelhiga was disappointed by the absence of clean label, artisanal frozen biscuit options. Rather than settling for what she described as “derivatives of the same commercial palm oil and aluminum-based biscuit,” Ms. Abuelhiga decided to take matters into her own hands and produce the biscuits in-house.

The success of the biscuits at the restaurant led to customers asking to buy them frozen to take home and bake, which eventually prompted a Whole Foods Market secret shopper to recommend that Ms. Abuelhiga pursue commercial expansion into the retail frozen breakfast market.

A few years after Mason Dixie’s entrance into the retail market, the COVID-19 pandemic began. Like other CPG companies, Mason Dixie was forced to pivot and reassess company goals and output. The company chose to discontinue freezer-to-oven scones, instead seeking a product that could be prepared faster and attract a broader audience, specifically the Gen-Z market. When Mason Dixie’s biscuit breakfast sandwiches hit the shelves in 2021, they struck a vein and thus began the company’s rapid expansion into a formidable frozen breakfast brand.

“In many ways it’s great, and in many ways it’s challenging,” Ms. Abuelhiga explained. “Getting your team motivated around 300% growth and all the internal change and all the consumer changes and rebranding, that’s a lot, you’re asking a lot. I’m very cognizant of that. COVID has shifted a lot of business owners’ ability to be agile… I’m really grateful we have this flexible team here that’s motivated by winning.” 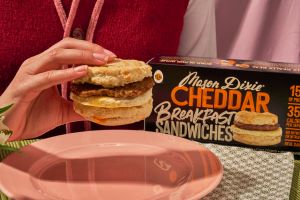 Mason Dixie breakfast sandwich
Source: Mason Dixie
Available in both buttermilk biscuit and cheddar biscuit form, the biscuit breakfast sandwiches only require a minute and a half of microwave time for preparation, making them a convenient option for younger consumers who might be resistant to preparing a biscuit that requires more than 20 minutes of preparation time in the oven.

“The majority of our consumers today are Gen-Z because (the biscuit sandwiches are) a ready-to-eat meal that hits on all the tenets of that generation and young millennials, too… this better-for-you, ‘I deserve better, I deserve to know who makes the food’ (attitude),” Ms. Abuelhiga said.

The breakfast sandwiches also led to a national partnership with Marriott Select Brand Hotels to stock the over 3,000 of the hotel chain’s breakfast bars with its artisan baked foods.

As a first-generation Asian-American woman born in Baltimore, Ms. Abuelhiga is not only celebrating her American Southern heritage with Mason Dixie, but also helping redefine the narrow mainstream tropes of Southern identity and comfort food. Residing in Section 8 housing for the first decade of her life, Ms. Abuelhiga’s family couldn’t afford to eat out regularly. Fresh, farm-to-table food was, by default, what she grew up knowing and loving.

“We even ate bruised produce over going to a conventional grocery store and buying produce there,” Ms. Abuelhiga explained. “Having that learning really shaped who I am today and how I consume food and how I want people to consume food. Even at our poorest, we were still able to do that, so it’s a sacrilege to me that (with) the unbalanced socio-economic access to food in this country, it’s easier for folks that have less to buy worse. And that’s not OK with me.”

One way Ms. Abuelhiga hopes to combat inequal access to clean label, additive-free, higher nutrition foods is by implementing incremental change in the food chain wherever possible. Rather than try to create a biscuit free from every allergen or taboo ingredient, Ms. Abuelhiga celebrates the fact that Mason Dixie foods contain whole, additive-free ingredients that could be pulled together by a home chef. In addition, expanding the retail options to include alternatives to the big-name brands can at least give consumers their choice of product, she said. 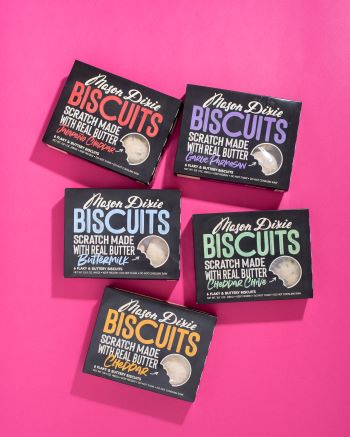 One of the reasons Mason Dixie postponed launching the biscuit breakfast sandwich even though it had been wildly popular at the restaurant for over five years was that the company wanted to wait until it could reliably source additive-free pork, Ms. Abuelhiga said.

While the ingredients timing was right for breakfast sandwiches at Mason Dixie, Ms. Abuelhiga also credits the company’s culture of equity and inclusion for fostering an environment that encourages authenticity and, subsequently, a diversity of perspectives that appeal to many different demographics.

“Our competition, they’re marketing with a caricature of a person, that even myself, as an older millennial, I didn’t know who that was,” she said. “That’s not going to hit… I mean, people vote with their dollar and they align their dollar with their values. So, from the get-go, building a company that’s representative of those values, we’ll always be sure we’re garnering the attention of that new generation of shoppers that has a big, big purchasing power now.”

To implement authentic Diversity, Equity and Inclusion (DEI) efforts, Ms. Abuelhiga believes a company must create a truly equitable workplace where employees feel comfortable being themselves. When that happens, she said, employee participation and growth become organic.

Outside of Mason Dixie, Ms. Abuelhiga is also a co-founder of the non-profit organization Project Potluck, which offers support and guidance to people of color in the consumer products industry.

“There are so many times you don’t realize you’re hiding yourself to just get past denial — not even to do better, just to get past ‘no,’” she explained.

After over a decade of navigating what she described as a corporate culture where she had to constantly code-switch to play down her differences, Ms. Abuelhiga knew from the start that Mason Dixie would be a company that celebrates and promotes diversity. Rather than feel discouraged by the state of today’s food industry, Ms. Abuelhiga was invigorated by what she saw as an ample opportunity to implement change and growth.

“When I ended up getting into food and beverage it was actually inspiring because it was so antiquated,” Ms. Abuelhiga said. “I was like, man, there are so many opportunities to win here, we’re not even close to where we should be. So, it was very inspiring, and looking back, I think everything I did on the road to here, those 14 years corporate slogging, did make me a better leader, founder and entrepreneur.”