We use cookies to provide you with a better experience. By continuing to browse the site you are agreeing to our use of cookies in accordance with our Cookie Policy.
Skip To Content
Home » Farmer Direct Foods owners upbeat on branded opportunity

The branded business at FDF had been very limited, Mr. Webster said in a July interview. The company now is looking to build its sales and marketing capability selling to specialty grocers and artisan bakers on top of a grower network and core operational capabilities he called “unique and proprietary.”

“We are building a sales and marketing infrastructure on top of a strong grain sourcing and manufacturing business,” he said.

In addition to the network of growers who are parties to long-term supply agreements, FDF operates a flour mill with 1,500 cwts of daily milling capacity in New Cambria, northeast of Salina, Kan., and a grain elevator 11 miles to the south in Kipp, Kan.

FDF will seek to grow by building a branded business that initially will be limited to varieties of family flour and eventually may include products ranging from baking mixes and pasta to ready-to eat foods.

“We believe the consumer is becoming more sophisticated,” Mr. Webster said. “Commodity flour is challenged because people are aware of things like bleaching and the nature of hybridized grain. So our focus is on super-premium, highly-differentiated products that meet a specific consumer need or want.”

Mr. Webster came to FDF via Bomar Holdings, an investment partnership he has led since 2019. From the start, Bomar has sought investment opportunities focused on sustainability, including the acquisition of Eco Vessel LLC, a maker of insulated water bottles and food storage containers. Bomar sold Eco Vessel earlier this year and has shifted its focus toward the grain-based foods sector. 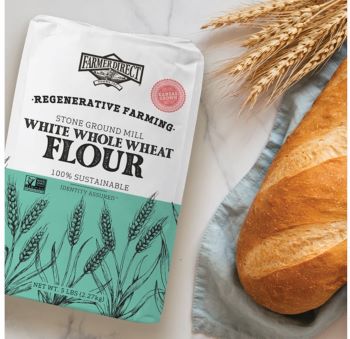 Farmer Direct stone ground white whole wheat flour
Source: Farmer Direct Foods
“Sustainability as an investment thesis made a lot of sense to us — doing well while doing good,” Mr. Webster said. “And the benefits of revisiting, reinvesting in food and agriculture — our investor group is very intrigued about what the future holds. We like being involved in significant markets that are foundational. We will focus on unique products that haven’t been able to get to scale for various reasons — capital, sophistication, expertise — all the reasons entrepreneurial businesses struggle.”

Together with sustainability and traceability, Mr. Webster said Heirloom Brands will look for opportunities to tap into consumer interest in nostalgia, or “going back to the way things used to be.”

The investment and management group assembled for Heirloom Brands includes a number of individuals with deep roots in the farming, flour milling and food industry. Investors include Plaza Merchant Group run by John Stout, who was an executive in the flour milling and vital wheat gluten businesses before establishing a private equity firm focused on the food sector.

Descendants of H.D. (Joe) Hale, who led ADM Milling Co. for many years, also are actively involved in FDF. Nelson Family Farms, led by Doug Nelson and Dana Hale Nelson (Mr. Hale’s daughter), are investors/advisers and are supplying grain to the venture.

The Nelsons’ daughter Hayley Eckert partnered with Mr. Webster in the establishment of the business and is vice president of strategy and business development/sales. In May, her cousin Keaton Hale joined FDF from Grain Craft, where he worked at the company’s flour mill in Pendleton, Ore. A graduate of the Department of Grain Science and Industry at Kansas State University with a degree in milling science and management, Mr. Hale is superintendent of the FDF flour mill in New Cambria.

The seeds of Ms. Eckert’s interest in FDF were sown during years she spent with Deloitte in Sydney, Australia. While there, Ms. Eckert gained an appreciation for a farm-to-table approach she said was far ahead of the movement in the United States.

“They were innovative in going back to the way things used to be done,” she said.

While she was away, the Nelson Family Farm in central Kansas began transitioning some of its acreage to the production of heritage and ancient grains. When she returned in 2020, Ms. Eckert established City Farmer Foods, a consumer products business that marketed the grains as well as flour in the Kansas City area.

Calling City Farmer Foods a “big education in the middle of a pandemic,” Ms. Eckert said she and Mr. Webster spent a year looking into opportunities in the food sector and “creating a thesis for what turned into Heirloom Brands and the vision we have looking forward.”

The exploration led Mr. Webster to approach FDF, which had been milling heirloom grains from the Nelson Family Farm. The American White Wheat Producers Association was renamed Farmer Direct Foods in 2003 after installing the flour mill, but by 2021 Mr. Webster said the group was “fatigued” and had been investing only limited resources toward promoting its own branded product. Ultimately, the group was attracted to a financial transaction that offered upside if FDF is successful going forward. 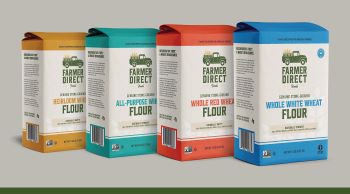 Farmer Direct flours
Source: Farmer Direct Foods
“The most important thing is we want the growers to remain a central, integral part of this,” Mr. Webster said. “It was win-win that they could put money in their pocket and maintain the opportunity to sell grain at a premium to the elevator price.”

FDF now has long-term grower agreements that he called a “unique structure.”

“We have built in a profit-sharing mechanism that in addition to a long-term growing commitment, ties the growers to the success of FDF,” he said. “Dana and Doug (Nelson) are actively working with us, because we envision growing the business significantly, so we will need a broader, larger, more diverse grower network both as to acres and the types of grains we source as we go down the road.”

Maintaining and building the network of 25 growers currently supplying FDF is critical to achieving the company’s goals around sustainability and traceability, Mr. Webster said. Regenerative agriculture is a central part of sustainability at FDF.

“At FDF they are way ahead of the market in terms of what they are doing with regenerative agriculture,” he said.
“That is a function of having King Arthur as their primary customer embracing a commitment to regenerative agriculture in addition to the fact there is a group of enlightened farmers who think taking care of the soil and taking care of the climate make good sense.”

The company’s regenerative agricultural practices follow strict guidelines and include the use of cover crops, crop rotation, dry farming, no-till, composting and the introduction of livestock for natural fertilizer.

Equally involved and perhaps more unique is the traceability of the company’s flour. FDF has a longstanding protocol around the certified seed varieties that may be used with fields subjected to monitoring. The wheat that farmers deliver is not co-mingled. It is batch milled providing farm to flour transparency. Mr. Webster likened it to a vineyard specific bottle of fine wine.

“There is a lot to the grower network,” he said. “We think this is how you differentiate our products in a marketplace where there is a lot of commodity business. Where the grains all have been comingled by the time they hit the mill.”

Even as the company plans to develop a diverse product line of grain-based foods longer term, FDF’s initial lineup of products to be branded under the Farmer Direct Foods name is simple. In addition to stone-ground whole wheat flour milled from either white wheat or hard red winter wheat the company already offered, FDF is introducing whole wheat flour milled from heirloom turkey hard red winter wheat and an all-purpose flour milled on a co-packing arrangement.

“Our initial lineup includes three premium-quality flours that combine our Identity-Assured (which is trademarked) higher protein wheats and stone-ground milling to consistently meet the exacting standards of artisan bakers,” Mr. Webster said. “Additionally, we have sourced a premium all-purpose patent flour milled to the same high standards to meet the full range of our customers’ flour needs.”

The objective is not to become the nation’s largest flour milling company, Mr. Webster said.

A rye flour is expected to be introduced shortly, and the company is expanding an operation milling Kansas-grown teff.

The company currently is headquartered in Overland Park, Kan., at Serendipity Labs, a co-working/flexible office space. In addition to Mr. Webster, Ms. Eckert and Mr. Hale, the lean team has grown to include Ben Mantooth as vice president of brands and digital marketing and Haley Sestak as sales and product specialist. Julie Mayden is vice president — grain, sourcing and chief financial officer. 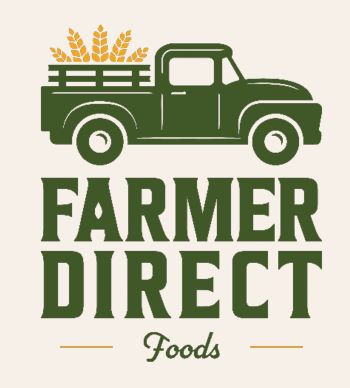 The team has rebranded and redesigned the FDF product line and is building out the marketing approach taken by Ms. Eckert’s City Farmer Foods, which has been folded into FDF.

As the heirs to the vision of the American White Wheat Producers Association, Mr. Webster and Ms. Eckert describe themselves as believers and both see potential for the wheat class to gain further traction.

“We think there is really untapped potential, because when we say to customers at the farmers’ market that this has a natural sweetness, they are immediately drawn to it,” Mr. Webster said.

Hard white wheat accounted for 4% of Kansas wheat production in 2021, up from 3% the previous several years, according to US Department of Agriculture data. At 4% of a 364-million-bu crop, hard white production was about 14.6 million bus last year in Kansas, enough wheat to mill about 6 million cwts of flour.

Mr. Webster added, “At the Heirloom Brands level we continue to look at other acquisitions. As Hayley goes into these bakeries, some percentage of their requirements can be met by our current offering and some involves a product we are sourcing elsewhere. We definitely will have a turnkey solution so most of the bakeries we go into we can take care of the rye, the whole wheat and the patent.”