Mr. Doyle was elected to lead NAMA during a board of directors meeting Sept. 30 at the NAMA annual meeting Sept. 28-Oct. 1 at the Royal Palms Resort and Spa in Scottsdale. 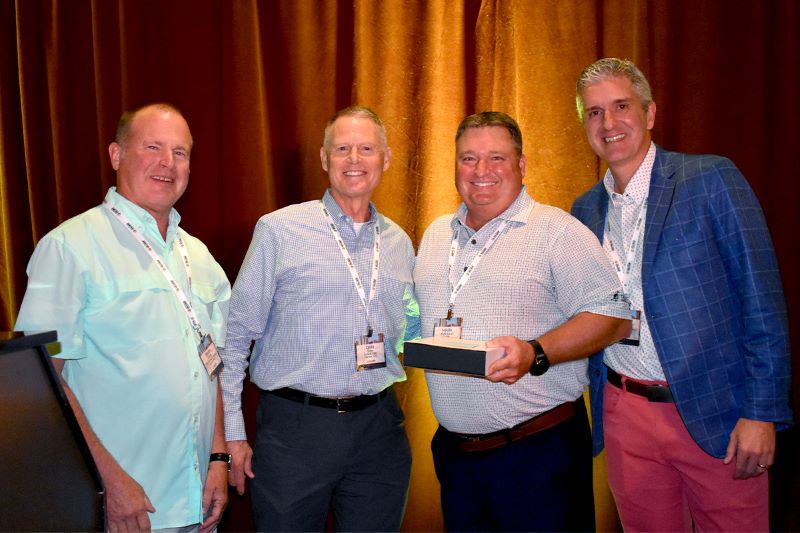 Former NAMA chair Mark Kolkhorst, retired president of ADM Milling Co., second from right, received a NAMA honorary membership at the 2022 annual meeting. He is shown incoming NAMA chair Brian Doyle, left, and with Dan Dye of Ardent Mills, second from left, and Tedd Kruse of ADM Milling and Baking Solutions, right, who paid tribute to Mr. Kolkhorst. Named an honorary member of NAMA was Mark Kolkhorst, who served as chairman of the group from 2016-18. Mr. Kolkhorst was honored during a formal dinner during the NAMA annual meeting. Offering a tribute to Mr. Kolkhorst was Mr. Kruse and Dan Dye, president of Ardent Mills LLC, Denver. Mr. Dye was Mr. Kolkhorst’s predecessor as NAMA chairman.

Mr. Kolkhorst spent his entire 35-plus-year career at ADM, beginning as a grain merchandiser in 1986 after he graduated from Illinois State University. He held numerous positions in ADM’s grain and soybean trading businesses before he joined the company’s Specialty Feed Ingredient division, first as vice president of sales and then president.

He was named president of ADM Milling Co., at the time in Overland Park, Kan., in 2007. During most of his tenure at ADM Milling, Mr. Kolkhorst also was a member of the NAMA board of directors. He retired from ADM at the end of 2021.