Why does bread get a bad rap?

MUNICH, GERMANY — For centuries, bread around the world has been a staple and provided a range of nutrition from folic acid to healthy whole grains. But as people increasingly seek out more nutritious foods, bread has somehow become villainized, despite the fact that baked bread is the No. 1 reason for grocery store trips in the United States.

“You can look at bread as a carrier of basic nutrition, but around the world — in the U.S., Europe and even South Africa — there’s a move away from enriched bread products,” said Robb MacKie, president and chief executive officer, American Bakers Association.

Mr. MacKie opened the panel by delivering recent sales data on health claims. He noted that as the popularity for “free from” claims is on the rise, the No. 1 selling claim — in dollar sales and volume size — is grain-free.

“This presents some unique challenges for the baking industry,” he cautioned.

Mr. Dwyer recalled a bakery he had toured while in Munich. At the facility, the staff wore t-shirts that said, “Evil Bread,” mocking the sentiment by playing on the title of an old horror film. Mr. Dwyer saw it as a hint that the baking industry has an opportunity to better educate consumers about bread’s healthy attributes. 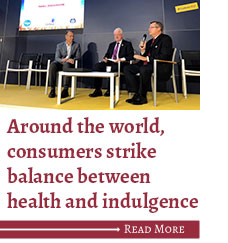 “There is a movement in the U.S. to bring the industry together,” Mr. Dwyer said. “In the past, it was all about competing with other bakers. After this trend toward a negative outlook on bread, we’re coming together and looking at how we can promote the industry.”

Under guidance from the Grain Foods Foundation (G.F.F.), a steering committee composed of executives in the milling and baking industries is currently deliberating over the opportunity to fund a checkoff program for promoting the consumption of “bread basket” foods. Previous programs in industries such as meat and dairy have yielded favorable results with cost-to-benefit ratios ranging from $2 to $10 for each dollar invested.

“As an ingredient supplier, we are 100% in support of G.F.F.,” Mr. Hotze said. “In our industry, nothing like this has ever been done before. We all saw what it did for ‘Got Milk?’ It really emphasized the positive attributes of milk. That program conditioned us as consumers to think about the health benefits of dairy. We just don’t hear enough about the good things — the nutritional availability, the benefits of whole grains, those types of great truths — that are in the bread we eat every day.  Those are the realities we need consumers to embrace.”

The U.S. Dietary Guidelines recommends six servings of daily food intake should be grains, half of which should come from whole grains.

“Those whole grains are great and very important, but there are also a lot of great health benefits that come from enriched grains,” Mr. MacKie said.

Drawing attention to bread and other baked foods starts with innovation.

Mr. Dwyer suggested treating the in-store bakery as a destination and the center store as the staple. The key to bringing the two together, he said, is through digital engagement.

“We’re investing heavily in our digital presence,” he noted. “We find that when we engage a shopper, we can lock them in as a loyal customer. And then you have the opportunity to share the benefits and positive story about bread.”