We use cookies to provide you with a better experience. By continuing to browse the site you are agreeing to our use of cookies in accordance with our Cookie Policy.
Home » How sifters ensure the safety of minor ingredients

How sifters ensure the safety of minor ingredients

It’s not just for the majors, though. Minor ingredients can benefit from it, too.

“In general terms, sifting is important because when the ingredient is in small portions, and if it tends to be clumpy or sticky, sifting can break it apart and keep it more consistent,” said Darren Adams, vice-president, engineering, the Fred D. Pfening Co. “That’s really important for small amounts of ingredients because otherwise you’ll get inaccuracies in how much you think you may be putting into a product.”

Getting out the lumps will also aid in process efficiency.

“If a particle is too clumpy or too large, it can affect certain mix times and equipment, which will ultimately lead to additional costs that could have been avoided,” said Ken Johnson, president, Gemini/KB Systems.

These functions are important for minor ingredients, but even beyond these, there’s one pivotal role: food safety.

“It seems obvious,” said John Hunter, sales account manager, bakery and ingredient handling, Bühler, Inc. “But the reality is that the potential contaminants can come from any of the ingredients that are put into the process.”

While it’s true that ingredient suppliers sift before placing their product into bulk or 50-lb bags, doing it again onsite is an added failsafe before introducing them into the process.

“We feel like sifting — true sifting — is best in order to be completely covered,” said Lisa Arato, regional sales engineer, Zeppelin Systems. “Even though it’s already been sifted by the ingredient supplier, just the process of emptying the bags has the potential to introduce contaminants into the product stream.”

A rule of thumb is to think in terms of potential contaminants, not just the ones in plain sight.

“You’re in a food facility, where containers are generally closed, and processes are followed, so there isn’t a huge potential,” Mr. Adams said. “But still, this is a last line of defense.”

Hand-adding ingredients introduces the potential for adulteration through something as simple as cutting open the bag.

“In cases of bags or super sacks, you have strings or little pieces of the cardboard bag that could possibly fall into the product,” Mr. Adams said. “That’s just because of the nature of how you’re getting the product into the system.”

Food safety is something top-of-mind for bakers no matter what the ingredient or how much is being used.

“Physical contaminants can come into sugar, salt or even dried yeast,” Mr. Hunter said. “All these have potential.”

Think of the sifter as a “safe zone” where these types of contaminants can be safely removed. 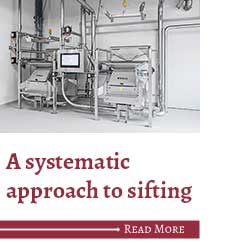 “The reason why bakeries have sifters at all is because they’re quality assurance tools,” said Bob Ricklefs, sales manager, Great Western Manufacturing. “They’re going to remove the filth and ultimately prevent the product from being branded as adulterated. They monitor and control product and process conditions, so depending on where the sifter is placed, you could be monitoring your suppliers as well as your own process.”

With such a protocol, bakers ensure their foods are safe while also maintaining their reputation.

“By ensuring that ingredients are contaminant free and nothing problematic was found, bakers have a high degree of reliability that the product will be safe to consume,” Mr. Ricklefs added.

Sifters up a baker’s food safety game, but additional measures can take it to the next level.

“Common best practice for optimal food safety combines the use of magnets with sifting in order to remove any metal pieces from ingredients before the sifting happens,” said Zach Turner, sales manager, AZO.

In pneumatic conveying, sifting is one part of that closed system that protects ingredients from outside interference.

“The ideal way to handle everything is in a sealed system,” said Jason Stricker, director of sales and marketing, Shick Esteve. “You’re dumping ingredients that will travel through the pneumatic conveying system, through the sifter and into a receiving bin, so you’re isolated from all potential environmental contaminants.”

While it’s a large investment, pneumatic sifting does offer bakers the peace of mind that they can quickly identify where a contaminant came from and address a potentially larger problem. For example, Mr. Stricker noted, a baker can recognize if a foreign particle was found prior to the mixer and determine if it came from an outside source.

“If it ends up in the mixer, you likely have something wrong in the environment in the facility,” he said. “Because it’s sealed up the rest of the way, it’s not possible for something else to get in there.”

That said, Mr. Stricker warned it could be an expensive proposition for a baker with a multitude of minor ingredients, so he advised bakers to look strategically at their ingredient list and level of potential food safety risk before making the investment.

Sifters can be used as the first — and last — lines of defense in preventing foreign materials from entering the product stream through minor ingredients. Because of this, bakers must monitor them regularly to ensure they’re functioning optimally. If there’s a breach in the defense, the whole operation can be put at risk.

“Sifters are a high-risk area,” said Robert Burgh, president, Nexcor Food Safety Technologies. “That means if there’s a problem such as a torn screen and it’s not caught, it could cause a recall.”

Torn screens don’t happen very often, but sifter tailing checks are still necessary to keep the risk to an absolute minimum. These checks can be quick, taking just 5 to 10 minutes per sifter.

“By doing tailing checks at least once per shift, a facility can ensure the sifter is

functioning correctly and the screens are not torn,” Mr. Burgh said. “They can do that without having to take the sifter apart.”

“If there’s a break in the screen, the system will shut down,” Ms. Arato said.

These sifters are designed to make screen inspections and the tailings check simpler for the operators to execute.

But it’s about more than just checking the sifter; documentation is key.

“Our clients are adamant to perform and document those sifter tailing checks,” Mr. Burgh said.

If they see no tailings, that’s an automatic red flag, and the system will automatically email management to alert them.

“That’s what a lot of our clients request, and it’s what our product provides,” he added.

This article is an excerpt from the February 2019 issue of Baking & Snack. To read the entire feature on sifting, click here.