We use cookies to provide you with a better experience. By continuing to browse the site you are agreeing to our use of cookies in accordance with our Cookie Policy.
Home » Ten ingredients to watch

Mr. Kostyo called 2021 the year “innovation roars back.” Citing Datassential data, he said 65% of consumers say they are tired of cooking at home, 58% are bored with comfort food, and 79% are craving something new overall.

“This supports the idea this will be the year of innovation,” he said.

Some innovation efforts have focused on creating comfort foods with a twist. The restaurant chain Shake Shack’s recently introduced Korean-style Fried Chick’n Sandwich, which features a spicy-sweet gochujang-glazed crispy chicken breast on a bed of kimchi slaw, was cited as an example.

Looking ahead, Mr. Kostyo identified 10 ingredients product developers may want to consider as they seek new ideas for innovation.

Fermented honey was one such ingredient. It sits at the intersection of two prominent trends — the consumer’s affinity for honey as a sweetener and the perception of fermented products as having a health halo, Mr. Kostyo said. As an example, he referenced the Butcher & Bee restaurant in Charleston, SC, which offers a whipped feta dip made with fermented honey and black pepper. 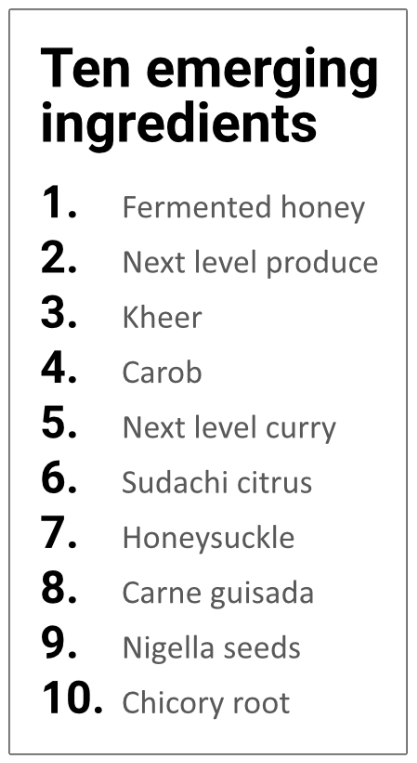 Next level produce like Del Monte’s Pinkglow pineapple and the Blue Java banana also are ingredients sparking interest among consumers. Such items offer consumers a twist in a familiar format, which has been at the heart of food and beverage innovation for a number of years.

Kheer, a Southern Asian pudding made by boiling milk, sugar and rice, tapioca or bulgar wheat also made Mr. Kostyo’s list. At the restaurant Rooh, Palo Alto, Calif., diners may find a wild rice kheer with dates and cashews on the menu.

In the 1980s, carob was thought to be an ingredient to challenge the dominance of chocolate. While that never happened, Mr. Kostyo said in 2019 and 2020 the ingredient grew 10% on menus.

“Chefs are realizing it has potential,” he said.

Sudachi citrus, a small, green citrus fruit from Japan has the potential to be a next level option to yuzu, Mr. Kostyo said.

“It’s a great option when looking to add acid,” he said. “You see it in cocktails.”

Another ingredient showing up in alcoholic beverages is honeysuckle. The Cathead Distillery in Jackson, Miss., offers a honeysuckle vodka variety that offers soft floral and herbaceous aromas, according to the company.

Product developers looking for a next generation meat flavor may want to consider carne guisada. It is a Latin beef stew often made with pieces of beef simmered with beer, scallions, garlic tomatoes, cumin and cilantro that has grown 23% on menus during the past year, Mr. Kostyo said.

While seeds have been trending for several years, nigella seeds are gaining in popularity. The seeds have a slightly bitter taste that can add crunch to a variety of applications.

“It’s a great option that has grown 87% on menus in the past year,” Mr. Kostyo said.

Finally, chicory root was identified as an ingredient to watch.