We use cookies to provide you with a better experience. By continuing to browse the site you are agreeing to our use of cookies in accordance with our Cookie Policy.
Skip To Content
Home » Pro Tip: Use droplet shape to understand protein emulsions

Making stable emulsions is important in many aspects of the baking industry. After bread dough is mixed and goes into the proof box, it behaves like a foam. As the gluten network expands from carbon dioxide produced by yeast, emulsifiers are needed to keep the air bubbles from collapsing. This is also true in cake formulas, where emulsifiers such as lecithin in eggs are crucial to the stability of the cake while it is rising and before starch has gelatinized.

However, some emulsifiers common in the baking industry, derived from mono- and diglycerides, do not conform to what consumers expect from clean label products, and there is a growing demand for egg-free products. The recent increase in popularity around “plant-based” foods has led many researchers and product developers to replace these emulsifiers with proteins from pea, lentil and other plants to capitalize on this growing market. 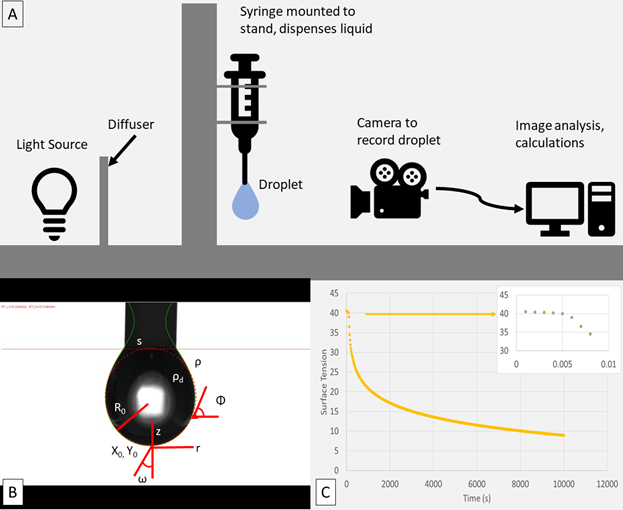 Figure 1: A – Basic design of a tensiometer. A droplet containing your protein in water hangs from the tip of a syringe. The camera records that droplet using a bright background, creating a sharp silhouette image that is analyzed in the computer; B – Sample image from a tensiometer. The marked variables help to calculate surface tension; C – Representative data obtained from tensiometer measurements. The inset shows for first few microseconds of the measurement, known as the lag phase of the emulsion.
Source: https://www.youtube.com/watch?v=6leNEeGuw2Y

Proteins adsorb strongly to oil droplets, leading to good stability, although this happens at a much slower pace than surfactants like DATEM. The rate of this adsorption can be seen using tensiometer readings.

Figure C shows a representative curve for a protein emulsifier. The end of the rapid decrease in surface tension takes about 10 minutes. This is why the order of addition for ingredients is so important when making emulsions with protein.

For example, if an emulsion is made by blending pea protein and xanthan gum at the same time, it will separate quickly. However, if the pea protein is blended with the oil and water first, then the xanthan gum is added, the emulsion will remain stable. The rate of adsorption can be increased by increasing protein solubility, which is highest around pH 8 in many plant-based proteins, and it can also be sped up by using smaller molecular weight proteins.