KANSAS CITY — Trading of food-grade organic grains and soybeans picked up and prices increased during the March-April period, according to Mercaris, the organic and non-G.M.O. trading platform and market information company.

Contracting increased in March and has grown to seasonal levels in April and so far in May comparable to past years, said Ryan Koory, senior economist at Mercaris.

Food-grade organic hard red winter wheat averaged $13.64 a bu in March-April, up 7c from the prior two-month period, and up $2.77 from January-February, with year-ago not quoted.

“Organic hard red winter wheat is holding mostly steady at the start of the second quarter, with the delivered price averaging $13.64 per bu over the two-month period ending in April 2018,” Mr. Koory said. “Trade volumes remained low but consistent with the prior month, in keeping with the generally quite tone of the market. 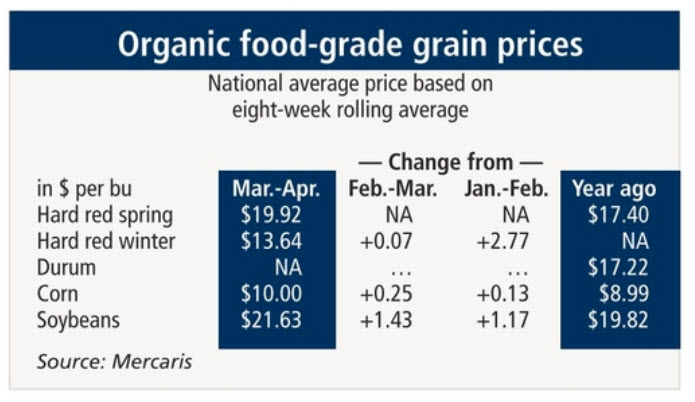 Prices for organic food-grade hard red spring wheat were quoted at $19.92 a bu, with the prior two reporting periods unquoted but up $2.52 a bu a year ago.

Organic durum wheat trades were limited in April, Mercaris said, but prices mostly ranged from $14.50 to $16 a bu.

Organic corn prices averaged $10 a bu during March-April, up 25c from February-March, up 13c from January-February and up $1.01 from $8.99 a bu a year ago, according to Mercaris.

“Organic corn trade was active in April, with Mercaris observing the most volume traded since September 2017,” Mr. Koory said. “Despite the increase in trade activity, the market continues to see spot prices capped at $10 a bu. U.S. corn planting progress remains delayed, with the top two organic corn states — Iowa and Minnesota — behind last year’s pace by 12% and 26%, respectively (as of May 6). Minnesota may be worth watching over the next month, as it is particularly far behind. In 2013 and 2014 yields suffered following a similar delay in planting, and 2018 could experience a comparable cut in production.

“Despite the cold and wet start to the 2018-19 corn crop, prices for fall delivery have not carried a premium this spring. The Mercaris’ recorded average delivered organic corn price for the fourth quarter of 2018 delivery is $9.70 per bu, within the range of spot quotes since the start of the 2017-18 marketing year. Given the potential for lower yields this fall, spot purchases of food-grade organic corn may become harder to secure over 2018-19.” 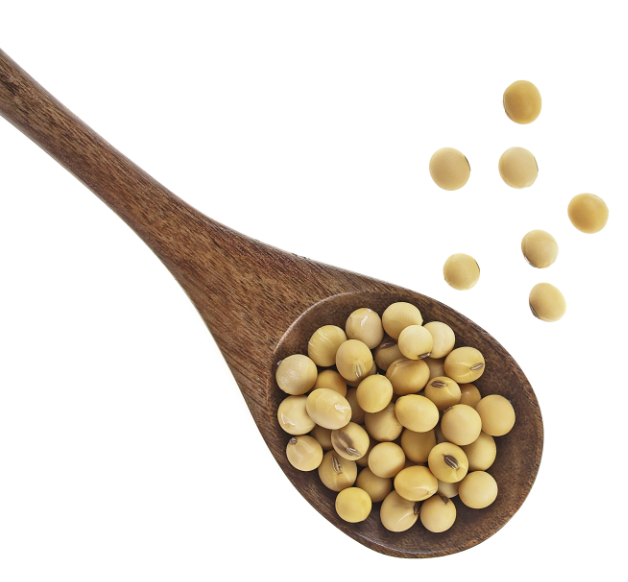 “Organic soybeans showed some bullishness at the start of the second quarter of 2018, with the March-April average reaching $21.63 a bu, its highest level since prices peaked in December 2017,” Mr. Koory said. “April also saw some quotes breech the $30-a-bu mark.

“Despite gains in the delivered organic soybean price, trade has remained slow. Historically, soybean spot trade activity peaks over the March, April, May time period; however, this trend has remained muted so far in 2018. The pace of soybean planting was slower at the start of spring. However, it appears that producers have mostly caught up over the past week. Organic producers may actually be slightly ahead of last year’s pace. Planting progress in the top-10 organic soybean states averaged 9% completed as of the week ending May 6, up 3% from the same period in 2017.

“Currently organic soybeans contracted for fall delivery are at a slight discount to the current spot price, with the fourth quarter of 2018 food-grade organic soybean price averaging $20.25 a bu.”

Mr. Koory noted that due to the nature of organic production, most farmers do not have the option of switching crops due to weather delays, as conventional growers may switch to soybeans from corn if planting is delayed too long. For organic crops, a farmer has to plant late, which may have a greater impact on yield.

Organic corn and soybean acreage tends to be concentrated in the Upper Midwest and Great Lakes region to provide feed to organic dairies, and food-grade organic production tends to mirror organic feed-grain production. Michigan, Minnesota, Wisconsin and Iowa have considerable organic acreage, along with New York, Texas and California, the latter three of which also are large dairy states.

Price changes from earlier periods sometimes vary from prior published quotes because prices are reported as a rolling average and are sometimes “backfilled” by traders, Mr. Koory said.

Mercaris is a comprehensive source of market data and online trading for feed-grade and food-grade organic and non-G.M.O. commodities based in Silver Spring, Md. For more information visit www.mercaris.com.