ST. JEAN DE MONTS, FRANCE — Throughout France, La Mie Caline’s chain of local bakeries and takeaway stores are about as popular as Panera in the United States. However, supplying a chain of 238 outlets with a variety of baked goods and prepared foods requires a choreographic effort by the business’ 200,000-sq-ft central bakery.

Located in an industrial section of a quaint seaside resort the west-central part of the country, the sprawling plant’s 12 production lines annually crank out tens of millions of classic baguettes, cookies, pain au chocolate, croissants and paninis with a nouveau touch. The products are then shipped frozen on a regular basis to the chain’s stores.

However, the key to the businesses long-term success is collaboration. At the central bakery, product development works hand in hand with production — an initiative that Stéphane Babarit, director of R&D and industrial process has overseen during the past 10 years to encourage innovation within the confines of operational efficiency.

Mr. Babarit noted that a cross-functional team of franchisees and R&D personnel dreamt up 60 product concepts last year, many of which were developed in the central bakery’s lab and test kitchen using VMI mixers, Polin ovens and a host of other sheeting and makeup equipment. During the process, La Mie Caline relied on internal taste testing as well as feedback from external focus groups to evaluate and fine-tune the prototype products.

For further validation, the company initially sold them in a handful of La Mie Caline pilot stores to obtain direct consumer feedback. In all, Mr Babarit pointed out that about 15 of those new products ended up being rolled out systemwide.

Maintaining ongoing innovation on such a large scale requires an operation that melds highly automated production lines with more labor-intensive ones for a handcrafted touch. It’s not unusual to see only three or four people working on a line that makes thousands of baguettes an hour while 15 others work side by side to meticulously finish off individual pastries or inject chocolate cream filling into eclairs in a 50˚F room in another area of the facility. Mr. Babarit said the goal here is to create sweet goods that look like they were handmade on-premise at La Mie Caline outlets.

Moreover, visitors must undergo a rigorous food safety process, including sanitizing hands and feet before entering the production area. In some departments, such as the catering area where employees make croque-monsieur — a baked ham and cheese sandwich with velvety, made-from-scratch béchamel sauce — everyone must also don facial masks before entering through the door. 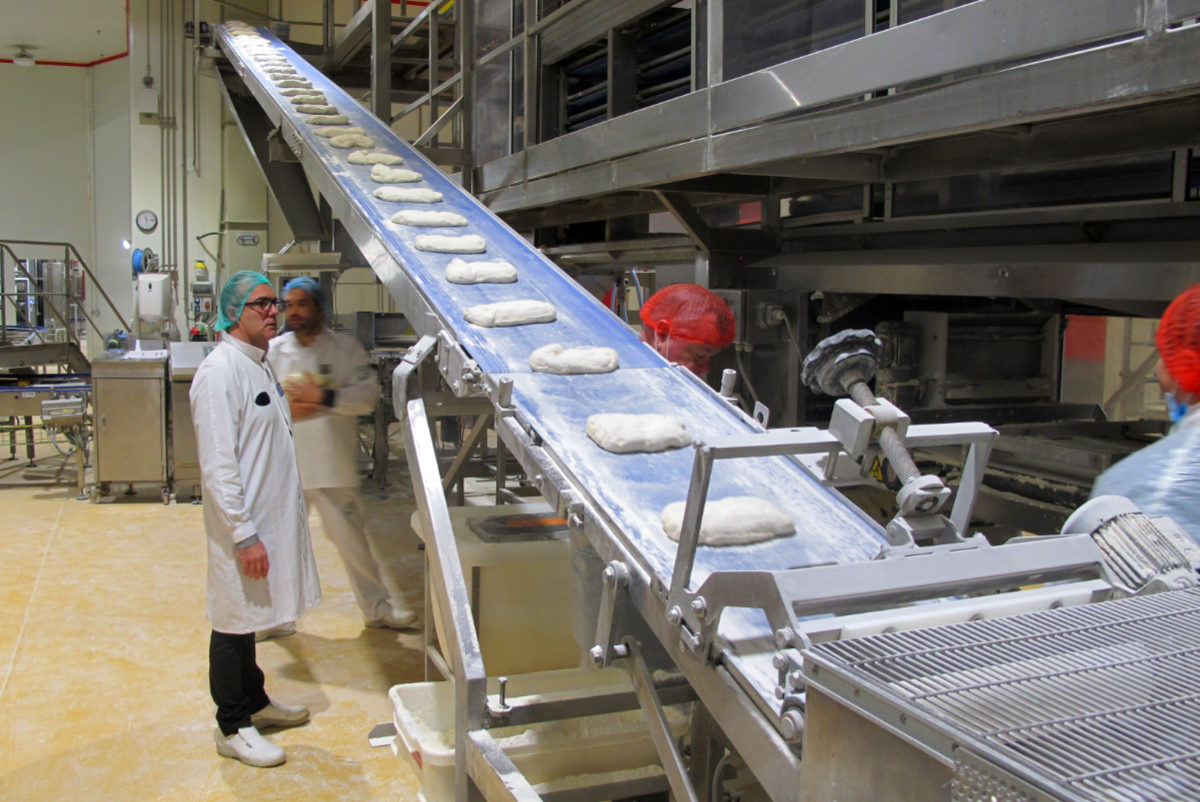 In the viennoiserie, or pastry area, two VMI spiral mixers fed the existing Rondo Doge laminating line as the newer one was under construction during Baking & Snack’s visit. Mr. Babarit observed that scheduling alternates between 16 hours of raw frozen croissant production followed by another 16 hours for making pain au chocolat. “We place a high emphasis on using only the freshest quality ingredients for our pastries,” Mr. Babarit said. “Many of these ingredients come from the rural farms in France.”

Nearby, a Rondo Doge line produces 3,000 individually sized pizzas an hour. After traveling through multiple reduction stations, the dough sheet is topped with olive oil and tomato sauce before it’s die cut into round pieces with the scrap recycled back to the VMI mixing station. Line workers then add cheese and other ingredients to create sausage, four-cheese, or ham and mushroom pizzas.

Following baking in a Gouet pizza oven for a few minutes, the par-baked pizzas travel through a 15-ft cooling tunnel to set the cheese and toppings before entering an ambient spiral cooler and a blast freezer set at -30˚C (-22˚F).

In yet another room, the bakery puts out beignets and yeast-raised donuts. After mixing and makeup, the round pieces are racked and rested before being manually loaded into a Reimelt fryer for 1 ½ minutes. The light, airy dough pieces float atop the oil as they fry, and when flipped over, they leave a signature white ring around the center of the donuts, which are later dusted with powdered sugar at La Mie Caline’s bakery shops and eateries.

Furthermore, in the segregated organic department, a WP Kemper divider feeds a Rondo Doge makeup system and multi-deck oven to create a variety of organic breads, mostly for an outside retail customer. Overall, 90% of the bakery’s business is dedicated to La Mie Caline franchisees while the remainder supplies a growing retail business outside its core chain.

In the newest part of the bakery, the workhorse of the bakery turns out 3,200 of its top-selling authentic baguettes per hour. Here, the VMI inline carousel mixing system relies on three spiral mixers and 12 fermentation tanks to produce highly flavored doughs with ample rest time to relax the batch. 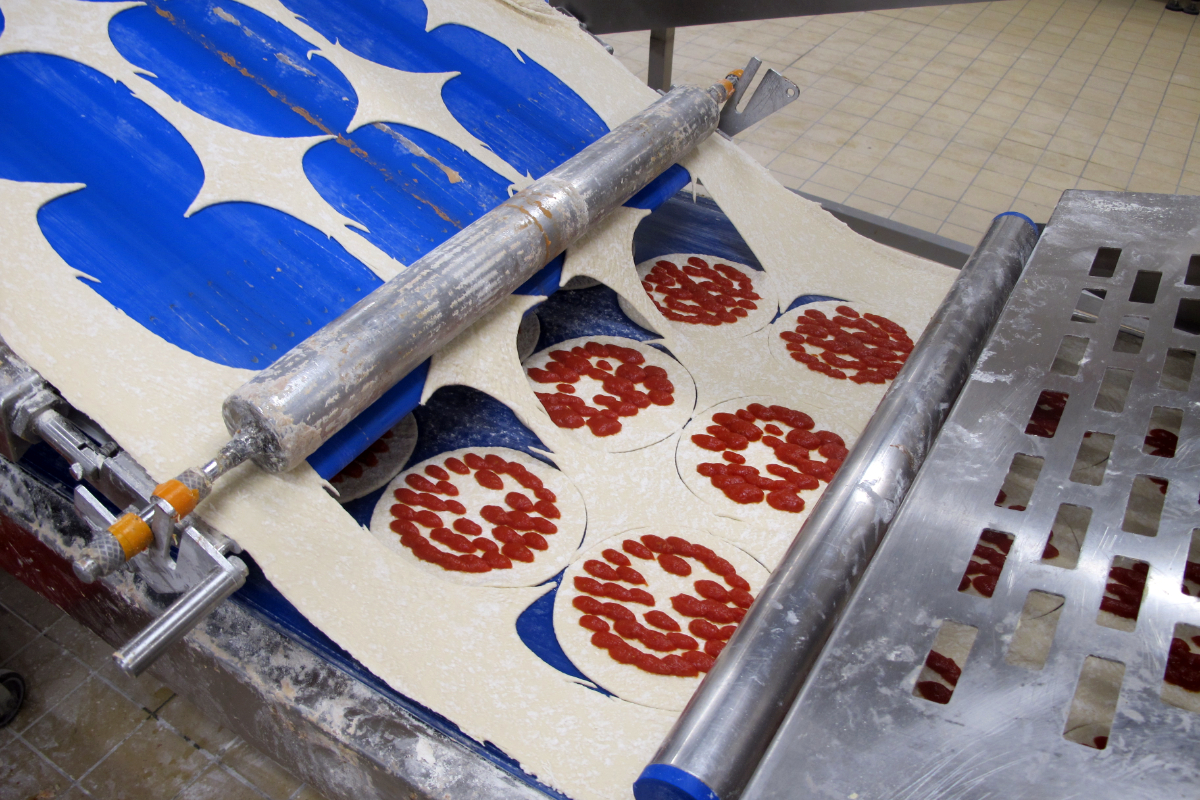 An automatic bowl lift takes the dough to a Mecatherm Tradivider that turns out 36 pieces at a time that are deposited on the belt below. After receiving a light flour dusting, a conveyor belt carries the pieces up to an overhead intermediate proofer for 15 minutes to provide additional rest time. Afterward, a centering station properly aligns the pieces as they enter a dough roller that flattens them before they glide through a curling chain and under two pressure plates to gently form and elongate them. An extender consisting of a series of belts mimics the movement of human fingers to gently stretch the pieces to 46 cm in length. They then travel on 800-mm-long peel boards to a Mecatherm twin-module vertical proofer for one hour.

Next, an adjustable, automatic water system accurately scores the pieces. Mr. Babarit suggested that using water scorer instead of razors or knives eliminates the risk of metal or other foreign matter getting into the products. All lines, he added, provide metal detection, and the bakery is exploring X-ray technology to add another layer of food security.

The pieces now bake in a Mecatherm three-deck tunnel oven. The initial zone provides the oven jump and sets the initial crust while the second one delivers the internal bake and the third zone determines the final color, according to Mr. Babarit. After 40 minutes of ambient cooling, the baguettes travel through a spiral freezer for 45 minutes.

By blending its production and R&D initiatives, La Mie Caline provides consumers with an affordable, fresh and innovative line of traditional French favorites while continuously reinventing itself. 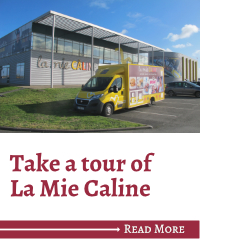