We use cookies to provide you with a better experience. By continuing to browse the site you are agreeing to our use of cookies in accordance with our Cookie Policy.
Home » Drought impacts southwest wheat

WICHITA, KAN. — It was another early start for the second day (May 18) of the Kansas Winter Wheat Tour. Over 80 scouts left their Colby, Kan., hotel at 7 a.m. — or earlier — to survey wheat fields along the west, southwest and south-central sections of Kansas. One route dropped down into five Oklahoma counties bordering the southern edge of Kansas.

The second day is known as the long day of the three-day wheat tour. Depending upon which of the six pre-determined routes selected, scouts drove between 400 and 500 miles to examine some of the harshest wheat conditions the state has seen in many years.

“It’s not easy being a farmer in southwest Kansas,” said Romulo Lollato, PhD, associate professor of agronomy and extension wheat and forages specialist at Kansas State University. Scouts agreed with Dr. Lollato’s assertion after driving deeper in the southwest corner of the state where green farmlands faded into overlapping acres of brittle, straw-colored fields. 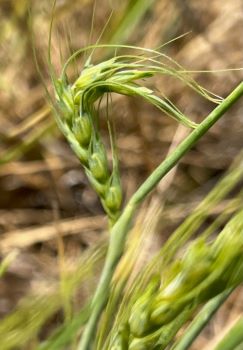 While most of the remaining wheat plants were severely stunted in this area with thin, yellowed leaves, the heads were surprisingly well-developed with an adequate number of spikelets. Dave Green, executive vice president of the Wheat Quality Council and one of the wheat tour guides, explained plants will focus all their resources into producing effective seeds in the wheat head. But some of the areas were so dry that heads were getting stuck in pinched leaves trying to conserve moisture, which caused the heads to bend and twist. Also, the shortened stalks are difficult for combines to grasp, which makes harvesting them impractical. Many fields had bleached heads sporadically popping up amongst the green ones. Dr. Lollato and other wheat experts on the tour said many factors could cause these heads to whiten, but they believed the main culprit was drought.

Scouts witnessed signs of severe drought everywhere in this section of the state. Not only were the crops depleted, but the ground displayed vast stretches of cracks and loosened dirt. In Haskell County, about 50 miles southwest of Dodge City, Kan., one wheat tour scout placed her yardstick inside a crack and found it went down 12-inches. 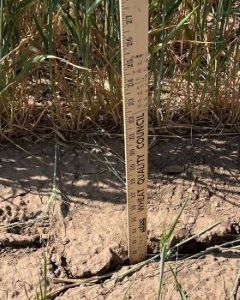 The day wasn’t all doom and gloom. It was obvious that fields benefited from fallowed land and irrigation, but Mr. Green said only about 10% to 15% of all Kansas wheat farms are irrigated. Fields began to convert back to green acres in Hartford County, just south of Wichita, Kan., where the scouts gathered in a conference room at the DoubleTree Hilton Hotel to share their data and insights from the day’s trip.

Using a standard formula provided by the US Department of Agriculture’s National Agricultural Statistics Services, collectively the scouts averaged an estimated 37 bus per acre, about 20 bus below the 2021 day-two tour average of 56.7 bus per acre and the historical average of 57.9 bus per acre. Of the 254 fields measured, five averaged less than 10 bus per acre.

“We were surprised with the decline compared with the average we got last year. This is not the crop we had last year,” Mr. Green said.