We use cookies to provide you with a better experience. By continuing to browse the site you are agreeing to our use of cookies in accordance with our Cookie Policy.
Skip To Content
Home » Pro Tip: Using chemical leavening to enhance baked foods

The first baking powder was created by English chemist Alfred Bird in the late 1840s. Mr. Bird combined cream of tartar from the skin of grapes and baking soda, which makes it easy for bakers to bake breads and cakes without yeast.

What are the different types of chemical leavenings?

Alkaline ingredients (baking soda) react with an acid salt in the presence of heat and moisture to form a neutral salt, carbon dioxide and water. The release of carbon dioxide through the chemical leavening system has a major effect on the volume, texture, shape, crumb color, grain and resiliency of finished products.

Leavening acids present in your recipe

Baking soda will react with any natural acids present in the formula when the batter is mixed or when heated in the oven. Natural acid ingredients include buttermilk, molasses, invert sugars and high fructose corn syrup, as well as any fruits and fruit juices used in baking. Using natural acids to achieve uniformity and consistency of gas production is too challenging due to the variability of the ingredients. Here is a table with estimated pH values:

Any leavening acid agent will release carbon dioxide from baking soda in the presence of water, but the overall reaction depends on the Neutralizing Value (NV) and the rate of reaction.

Since all chemical leavening systems use baking soda as the base, the strength of the acid is measured against the baking soda. The NV — also called neutralizing strength — is the weight in pounds of baking soda to completely neutralize 100 lbs of the acid. 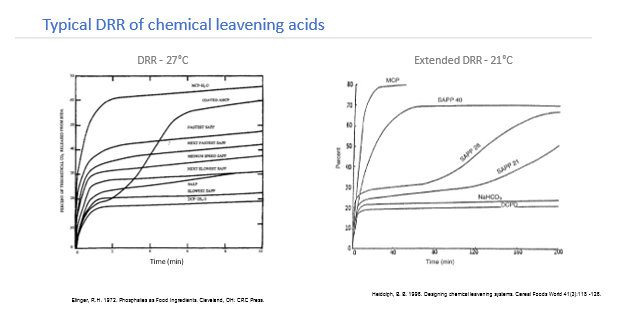 The selection of the proper chemical leavening system is based on many factors, including the strength and the rate of reaction of the leavening agents, the effect of other ingredients like high-fructose corn syrup and buttermilk, the amount of moisture in the dough or batter, the processing conditions (floor time, batter temperature and baking conditions), and the desired product characteristics (volume, color and texture).

Richard Charpentier is a classically trained French baker, CMB, holds a degree in baking science from Kansas State University, and is owner and chief executive officer of Baking Innovation. Connect with him on LinkedIn.