We use cookies to provide you with a better experience. By continuing to browse the site you are agreeing to our use of cookies in accordance with our Cookie Policy.
Home » Putting dessert portioning on automatic

Despite major developments in dessert slicing over the past few years, there’s a slow evolution of fully automated equipment. From touchscreens to interface-driven technologies, automation has the potential to increase output, decrease production time and, more importantly, bolster the bottom line for bakeries.

“If you were to ask me where I think the industry is going to be in 10 years, we’re likely going to see more refined controls and programming,” said Craig Kominiak, sales consultant, Erika Record Baking Equipment. “Long term, I envision systems being able to generate reports for management or even having some control via mobile devices.”

With bakers keeping up with regulations and experiencing an increase in the cost of employees, automation provides the ability to increase production speeds.

“Automation is the big one, and it’s the one that gets me excited,” said Doug Petrovich, vice-president of sales and services, FoodTools Consolidated, Inc. “We know what it costs to have employees, and the bakeries always have hundreds of employees.” 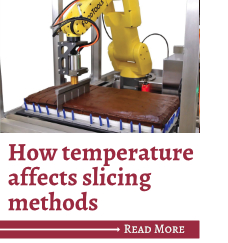 A large portion of automation revolves around hygiene, and automatic cleaning systems are becoming increasingly popular. Justin Atkins, director of sales, Bettendorf Stanford, has seen the industry go from not using washdown equipment to many companies requiring it.

“It’s sort of a shift toward a U.S.D.A. environment rather than the traditional F.D.A. environment,” he said. “Our equipment has also shifted heavily toward stainless and away from powder-coated steel frames.”

Highly automated systems can increase productivity on dedicated lines to crank out high numbers. However, many of the smaller manufacturers must deal with timely and costly changeovers.

“They’ll run a product for a couple hours then switch over to another product,” Mr. Atkins said. “As small bakeries begin to grow, they’ll have longer runs, which will allow them to look into increasing the automation for specific products.”