We use cookies to provide you with a better experience. By continuing to browse the site you are agreeing to our use of cookies in accordance with our Cookie Policy.
Home » New facility bittersweet investment for Miller Baking

With a management team to help him carry the load and a crew that could support the company’s revenue growth, Mr. Miller took the next step: a difficult decision to end the fresh route business his father started. He made the emotional decision in December 2017 and renovated the 5th Street bakery so it could produce Pretzilla bites and twists.

“The decision to end it was purely economical,” he said. “Ninety per cent of our revenue had become Pretzilla, and we needed additional capacity. It was an emotional decision because of the connectivity it had to my family history.”

The building was gutted, and construction began on Jan. 2. The old building needed a lot of work, and renovating from floor to ceiling allowed Miller Baking Co. to get the building in compliance with all the latest regulations for food and worker safety. Both bakeries are S.Q.F. Level 2 (based on the Safe Quality Institute code). 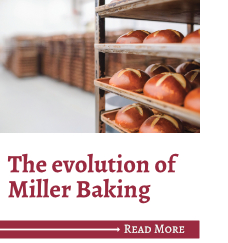 “So much about what S.Q.F. or Global Food Safety Initiative is about is not only the paperwork but the infrastructure and maintaining it so you can better prevent foodborne illnesses,” Mr. Miller said.

Construction on the 5th Street bakery was finished March 5, and production on the one-and-a-half lines, which include Koenig makeup equipment, began the following week. The bakery also uses Revent ovens, a change from the Sveba Dahlen at the Steven Road facility to appease the company’s baker.

“Our baker grew up with Revent ovens, so that’s why we use them,” said Mike Walz, chief operating officer, Miller Baking. “When you find a good baker, you give him what he wants.”

Even with the recent investment in this facility, Mr. Miller already predicts that the company will outgrow it quickly. The next step is to move all production under one roof. This old building isn’t going anywhere, though; it’s been a part of the company for too long.

“I see this as a really great test facility down the road,” he said. “We’ve got some exciting ideas for other line extensions. Instead of trying to work in testing around our production schedule, I’d like to be able to keep continuous R.&D., and this is a great building to do that.”

For now, the immediate game focuses on expansion of the Pretzilla brand. It may have national distribution, but there is still much of the country that is unfamiliar with the product.

“We’re strong in the Midwest and other major metros, but we’re still not available in many parts of the country,” Mr. Miller said. Someday, he hopes Pretzilla will be a household name.