We use cookies to provide you with a better experience. By continuing to browse the site you are agreeing to our use of cookies in accordance with our Cookie Policy.
Home » Organic hard wheat prices rise in June-July

KANSAS CITY — Prices for organic food-grade hard red spring wheat and hard red winter wheat advanced in June-July from the April-May period, as did values for durum and soybeans, while soft red winter wheat declined and corn edged lower, according to Mercaris, the organic and non-G.M.O. trading platform and market information company.

In an Aug. 14 report, Mercaris noted expectations of a rebound from 2017 in organic spring wheat yields based on early-August conditions.

“The organic spring wheat crop shows signs of improved yield this year as key northern states have avoided the severe drought conditions that hampered last year’s crop,” Mercaris said. “Mercaris estimates 2017 spring wheat yields declined 13% from the prior year, but with the improvement in this year’s crop condition, yields are likely to recover significantly. Montana in particular has seen the percentage of the crop rated in good-to-excellent condition increase to 61% as of the week ending Aug. 4, up from just 9% last year.”

Mercaris’ good-to-excellent ratings for organic, non-durum spring wheat in other states were 83% in North Dakota (33% a year ago), 51% in South Dakota (8%), 83% in Minnesota (85%) and 58% in Oregon (67%). Drought condition ratings for organic spring wheat areas improved significantly from a year ago in Montana, North Dakota and South Dakota and were little changed in Minnesota and Oregon.

“Organic durum wheat purchasing has slowed again in July, pulling prices lower along the way,” Mr. Koory said. “The June-July 2018 average remained above $20 per bu, but more recent contracts suggest prices are beginning to fall below $15 per bu. Conditions are dry and conducive to harvest, and the U.S. durum wheat crop appears to be in a far better condition. Previously Mercaris had indicated the potential for this year’s crop to improve significantly leading to bearish price pressure, and July may be showing the first signs of this.” 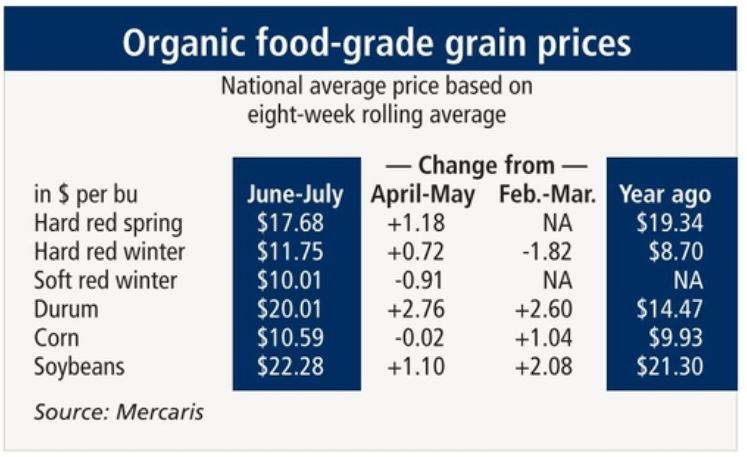 “Organic soybean prices continue to move higher through the third quarter, averaging $22.28 per bu over June and July, up more than $1 a bu from the prior two-month period,” Mr. Koory said. “Mercaris estimates that 2018 organic soybean yields will average 35.9 bu per acre, up 4% from last year. This boost in yields, paired with acreage growth, is likely to add a considerable amount to domestic organic soybean supplies for 2018-19. Despite this, the market has priced new crop soybeans at a premium, with contracts for first-half 2019 delivery averaging over $23 per bu.”

The market appeared less enthusiastic for organic corn, however, with prices easing to $10.59 per bu during the June-July period, but holding above the year-ago level of $9.93 per bu.

“Organic corn contract volumes are at a crawl, with very little volume set for delivery ahead of October when the 2018-19 crop harvest will be fully underway,” Mr. Koory said. “So far in the second quarter, organic corn prices have been fairly stable and at a premium to last year. Contracts for fourth-quarter 2018 delivery are mostly even with current prices, and up more than $1 per bu from last year.”

Mercaris forecast the average yield for organic corn at 121.8 bus per acre, up 0.5% from a year ago, with the exception of Texas and Missouri, where drought is expected to reduce this year’s yields.

“Mercaris is in the process of completing its 2018 organic crop acreage forecast and will soon be able to comment on what domestic organic corn supplies will look like for the 2018-19 marketing year,” Mr. Koory said. “Mercaris expects to see another year of growth for the industry. However, given how flat prices appear from now into the fourth quarter, and our projection of mostly steady yields, it doesn’t appear likely prices will give back the gains they made over the 2017-18 marketing year.”

Also in its Aug. 14 report, Mercaris warned of potential “red flags” about imports of organic corn. Using data from U.S. Customs and Border Protection and the U.S. Department of Agriculture, Mercaris noted that two shipments of organic whole corn totaling 23,723 tonnes (accounting for about 18% of U.S. 2017-18 organic corn imports) were received from Serbia via bulk container ships from a Romanian port.

“While it’s not unusual for buyers to turn to new foreign markets for organic corn, given the gap between U.S. demand and its domestic production, Serbia is a surprising foreign market,” Mr. Koory said. “Its proximity to other countries in the region who have been found to ship fraudulent organic corn to the United States immediately raises a red flag. Then we look deeper and find that the Serbian imports were shipped from a Romanian port and loaded in bulk container ships, which increases the risk of contamination with non-organic commodities. Such a significant influx of foreign organic corn could undercut domestic production.”

Mercaris is a comprehensive source of market data and online trading for feed-grade and food-grade organic and non-G.M.O. commodities based in Silver Spring, Md. For more information visit www.mercaris.com.