We use cookies to provide you with a better experience. By continuing to browse the site you are agreeing to our use of cookies in accordance with our Cookie Policy.
Home » SNAC panel deep dives into cutting-edge trends

AMELIA ISLAND, FLA. — When it comes to health and wellness, consumers want as much guidance as possible on better-for-you and other new products, but they don’t want to be dictated as what’s best for their bodies. That’s more of a personal choice, according to a panel at SNAC International’s Executive Leadership Forum (ELF), held Sept. 27-29.

“Consumers don’t want to be told what is healthy or what is not healthy,” said Carlos Abrams-Rivera, president of Campbell Snacks, a division of the Campbell Soup Co. “They want to be able to see what ingredients you have in your products.”

Shoppers, he said, want to make their own decisions on gluten-free, non-G.M.O. and organic products. Mr. Abrams-Rivera suggested that companies make and market better-for-you snacks that allow shoppers to make their own individualistic choices.

“Consumers are getting smarter and smarter,” he said. “They’re pushing us to be smart companies.”

A decade ago, Lisa Walsh, chief executive officer of Truco Enterprises, recognized organic and non-GMO Project-verified snacks were emerging in the natural channel.

“Now you look at where we are today,” said Ms. Walsh, who has more than 25 years of consumer-packaged goods experience and became the head of Truco, which distributes On the Border snacks and dips, earlier this year. “If you are not in that space, you can’t be a player in snacking.

“There’s an ability to deliver to the consumer an experience where they feel great about what they are putting in their bodies and they’re hyper-sensitive to what’s in the bag or in the jar.”

On the flipside, it’s still important to have snacks with great taste.

“There are so many players who have come into better for you with all of the right labeling, but they don’t taste good,” she said. “They don’t last.”

Mr. Baum noted the traditional drivers to path to purchase are price, taste and convenience, but not necessarily in that order.

“Still critically important, if the product doesn’t taste any better than the bag that it comes in, you’ll get trial but not repeat purchase,” he said.

Additionally, he stressed that companies examine how consumers feel about their products in the long run.

“It’s not how I feel after I eat this snack,” Mr. Baum said. “For my children, what are the long-term implications of eating these products over a period of time?”

Other issues influencing purchasing decisions include animal welfare, human welfare, workers’ rights and other social issues wrapped in a layer of transparency.

“We’ve got to make sure we understand this consumer and connect with them in a way that resonates with them,” Mr. Baum said.

In fact, the company holds the No. 6 share in coffee sales nationwide, even though it only has stores in six states. Overall, he said, the company sells 220 million cups of coffee a year and more than 110 million hoagies and sandwiches as a part of its burgeoning food service business. He sees the positive attributes of food as the wave of the future. 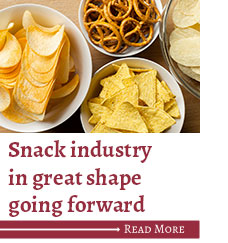 Three years ago, Wawa initiated a food council to focus on health and wellness. The council includes food scientists and a couple veterinarians that help with animal welfare policies.

Specifically, Mr. Baum pointed out that Wawa is looking to reduce salt and sugar not only in its food service menu but also in snacks and other c.p.g. items. The company is collaborating with food manufacturers to provide consumers with a greater array of gluten-free products and higher-quality food service items.

“The challenge is looking for more natural sources of protein, and the challenge is how to inject more plant-based proteins into traditional snacks without compromising flavor,” he pointed out.

When venturing into the health-and-wellness arena, Ms. Walsh noted that snack manufacturers must remain relevant to their brand authenticity.

“Because there are so many trends, you have to be true to understanding what the consumer connection is with your brand, and then innovate in a way that is authentic for them,” she said.

A kale chip, for instance, or even a protein snack probably would not fit within the On the Border line. Rather, Ms. Walsh said, flavors such as spicy heat and Mexican-style tajin resonate with the brand’s loyal consumers.

“How do I get a favorable experience with heat — because heat is so on-trend right now — and do it in a way that is better for you?” she speculated.