Diving into the digital divide

I remember when I was kid and thinking that the 21st century seemed like a million years away. If things turned out the way TV shows and movies told me they would, we’d have been cruising around in flying cars before the robots finally took over. (Or, god forbid, HAL 9000 would be running the bakeries.)

We might not have come that far just yet, but I do believe we are sitting on the tipping point of the great digital divide. Whether it’s data harvesting for predictive maintenance, remote controls for recipe management, or virtual and augmented reality for training, “digital” will be the theme in 2019.

It should come as no surprise, considering the workforce issues we’re facing these days (hint: that’s another one to watch next year). But it’s not just the gap in skilled labor that’s driving bakers to rely on digital controls. Industry 4.0 is the result of an entire generation raised on digital technology. 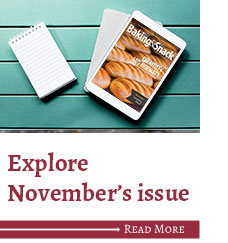 Sure, automation and robots are viable options to accommodate a lack of skilled labor. But manufacturers of all kinds are recognizing that the skills of the current workforce revolve around technology. Anyone who’s attended recent trade shows will agree. Take virtual reality: Dan Malovany, editorial director, noticed that just a few years ago, it was a hook to draw booth traffic, but today, some suppliers offer it as part of their equipment.

While I was at iba in Munich, I visited with Joe Turano, president of Berwyn, Ill.-based Turano Baking Co. and 2019 IBIE chairman. He had the chance to tinker with augmented reality demos at the show and saw great potential for further training tools or visualizing line layouts for the future.

He also observed that there’s a renaissance in artisan baking happening parallel to this surge in automation. I don’t think anyone knows that better than our featured bakery this month — Something Sweet, based in New Haven, Conn. — which has been crafting pies for more than two decades and is now bursting at the seams and ready for full automation.

Smaller operations like this can benefit from this digital revolution, but that doesn’t mean larger ones can’t make even more leaps. Jim Kline observed several digital advances at iba that bakeries of any size could benefit from.

And the digital theme prevailed at Pack Expo in Chicago, as well. Stay tuned for the December issue when we reveal how packaging innovations are diving into the great digital divide.

Now, everyone’s begun 2019 IBIE planning — as the official media provider, we are no exception — and I can’t wait to see what digital technologies await. But I’m impatient, so if you have an operation that’s going (or gone) digital, give me a ring; I’d love to come visit! Just so long as HAL’s not in charge.