We use cookies to provide you with a better experience. By continuing to browse the site you are agreeing to our use of cookies in accordance with our Cookie Policy.
Skip To Content
Home » Key committee gives green light for grain-based foods checkoff

WASHINGTON — In a major step forward toward the launch of a checkoff program devoted to the promotion of grain-based foods, a steering committee of the Grain Foods Foundation has agreed to submit a draft order to the U.S. Department of Agriculture later this month. If the order (checkoff proposal) is approved, assessments to fund the program may begin in the second half of 2019.

With the program, the grain-based foods industry will invest about $23 million annually with objectives that include reversing a decline in sales, enhancing the perception of bread and generating research to bolster the understanding of the healthfulness of bread.

According to the G.F.F., representatives of the steering committee will travel to Washington early this year to meet with Secretary of Agriculture Sonny Perdue to brief him on industry support for the checkoff. Checkoff programs are overseen by the U.S.D.A.’s Agricultural Marketing Service. 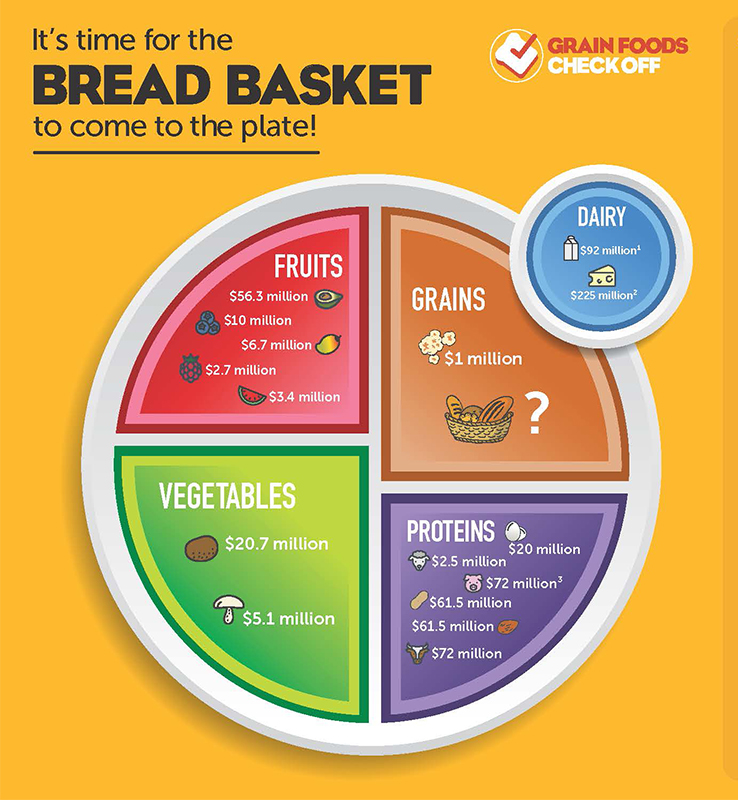 The decision by the steering committee came five months after the committee met and concluded that the G.F.F. had enough information to fulfill U.S.D.A. requirements for a draft order but that many in the industry still did not understand the program adequately. Over the late summer and through the fall, more than 30 meetings were convened by phone and in person between leaders of the baking industry and Christine Cochran, executive director of the G.F.F., and Kelly Knowles, director of development.

At the December meeting, the steering committee was updated on the outreach efforts.

“The members of the committee agreed that while there is not yet universal industry agreement on proceeding with the checkoff, there is enough support at this point to move forward with bringing the draft order to the U.S.D.A.,” Ms. Cochran said.

The cost of the program will be borne by millers and bakers at a ratio of 15% and 85%, respectively, exclusively for what the G.F.F. is referring to as “breadbasket products.” Subject to assessment are sliced bread, unsliced bread, rolls, buns, bagels, naan, pita, other flatbread and English muffins. Tortillas will be excluded from the assessment as will be frozen baked foods, bars, crackers, sweet goods and many other flour-based foods.

Millers and bakers will pay a combined 16c per cwt of wheat flour for breadbasket products with millers paying 2.4c per cwt and bakers paying 13.6c. Bakers will be responsible for collecting the assessments from millers and remitting the entire 16c to the board.

To reach the $23 million estimated annual budget, the 16c will need to be assessed on 144 million cwts of annual production, equating to almost exactly a third of the 426 million cwts of flour milled in 2017 in the United States.

Following the meeting with Mr. Perdue, the order will be published in the Federal Register, initiating a comment period expected to last 60 days.

The comment period will allow industry stakeholders and any other interested parties to share their views in support of or opposition to the order, for the public record. Assuming the comments affirm general and widespread support, assessments could begin in the third quarter of 2019. Meanwhile, the checkoff board would be established to administer the program and begin planning programming beginning as early as the first quarter of 2020.

“The program can be launched and underway for up to three years before the industry must vote in a referendum to officially establish the program,” Ms. Cochran said. “During the ‘trial period’ assessments will be collected, but a reserve fund will be kept from the assessments in case refunds are requested. Once a referendum vote is held, if passed, the checkoff could operate for up to seven years at a time without additional votes.  However, if a minimum of three assessed companies decide — at any time — that they would like to call an industry vote to end the program, they may do so.”

For the referendum to pass, it must be approved by a majority of flour millers, a majority of bakers and by bakers accounting for production of 60% of the volume of all breadbasket products baked by bakers voting in the ballot.

Priorities to be finalized

Once the program is launched, it could take many forms.  While program priorities will be established by the yet-to-be constituted checkoff board, possibilities offered by Ms. Cochran include:

“Targeted health influencer outreach will continue to be a priority, but again, on a significantly larger scale,” Ms. Cochran said.

The initial checkoff board will include two millers and eight bakers, roughly mirroring how the industries will be splitting the cost of the program.

Achieving scale is among the principal objectives of the checkoff program, Ms. Cochran said.

She explained, “While G.F.F. has proved to be incredibly efficient and effective with its current budget, G.F.F. investors have told me again and again that what we lack is scale. Are our research efforts strong? Yes, but more are needed. Was our P.R. campaign the most effective ever last year? Yes, but with a very limited budget relative to other commodity programs. Are we reaching media with our research and experts? Again, yes. But we are limited by the small size of our team and the limited budget we give them for outreach and paid media support. The feedback has not been that our work is not good enough; the feedback is that the work is not big enough.”

While a sharp increase from the $1 million in grains checkoff spending currently (for popcorn), the $23 million program would be far below what is being invested in other food categories, including $317 million for dairy, $289.5 million for protein (including eggs, meat and nuts), $79.1 million for fruits and slightly less than $25.8 million spent on vegetables.

“G.F.F. has basically operated as a voluntary checkoff program, although with no government partnership nor mandate,” Ms. Cochran said. “I hear again and again from investors: my competitor is not paying his fair share. The voluntary part leads to the free rider issue, which honestly limits the size of pledges and distracts from our work.”

A checkoff program, which is not voluntary, ensures that all companies benefiting from the program pay a calculated assessment.

“Auditing is done by a third party, so confidential and proprietary information is protected,” the G.F.F. said. “With an involuntary program, no one company needs to be concerned that competitor organizations are not paying in equitably.”

Since exploration of a checkoff program began in late 2017, the competitive disadvantage of grain-based foods versus competitive food groups underpinned the push of industry leaders in favor of a mandatory program.

“The baking industry’s products are outspent by other food groups on an incredible scale,” Ms. Cochran said. “One steering committee member pointed out that by proteins alone, we are outspent by a factor of 600. While our sales are declining and Americans are faced with much misinformation about consuming bread, buns, rolls, etc., we cannot afford to spend less than any other of these groups on promotion, research and innovation. The state of the industry right now is clear and has sparked much concern among bakers and millers; there is an opportunity now, with a checkoff-friendly Secretary of Agriculture, to not only improve sales in the next three-to-five years, but to build upon an already strong legacy for bakers and millers in the next decades. This investment is a long time in coming, say many on the steering committee, and time is of the essence to begin to turn the tides of both sales and public perception of the essential nutrition that our products deliver. What I am hearing from those around the table on the committee, is that we must act now.”