In today’s tight workforce, automating the end of the line seems like a no-brainer. So why don’t more bakers and snack producers invest in the case-packing process?

“For the same reason we don’t change personally — because change is hard,” responded Jerry Buckley, south central regional sales manager, BluePrint Automation (BPA). “We are creatures of habit, plus we are all very busy. Often change does not occur until we feel some significant pain.”

That uncomfortable feeling, he added, comes in many forms and in varying degrees.

“In the world of the baking and snack business, that pain could be the loss of important customers because you could not fulfill their orders due to a lack of staff on the second or third shift,” Mr. Buckley explained. “Or, it can be not reaching your profit margins for the year and having to lay off staff because the cash flow did not come in as expected. Or, it may be because you had to run your lines slower due to a lack of workers that dictated the pace at the end of the line. If there is pain involved, things start to change.”

Lawrence Roos, chief product development officer for TNA, postulates that streamlining the case-packing process ultimately depends on the size of the business. Quite a few multinationals, he noted, have fully automated the end of their lines to improve operational efficiencies. Smaller family-run companies have less economies of scale to justify such investments.

“A lot of these businesses have been around for decades, so there’s a lot of history and tradition there,” Mr. Roos said.

He added that investing in case packing also tends to take a back seat, especially for snack food manufacturers that hold down the cost of their operations to maintain high-profit margins and maximize the return on investment (R.O.I.).

Another theory? Historically, many bakers and snack manufacturers preferred the flexibility of manual product handling, particularly if their lines didn’t run at high speeds, said Bryan Sinicrope, vice-president of sales and marketing, A-B-C Packaging Machine Corp. However, that long-held premise is up for debate.

“Today, there are multiple packing automation options, including horizontal, vertical and robotic pick-and-place packing that can benefit packaging productivity, regardless of line speed,” he pointed out.

Eventually, all snack makers will need some form of automation to stay competitive, but several companies are hesitant to automate for other reasons.

“Many snack producers are co-packing for other companies and have a lot of short runs, which is not conducive to automation,” observed Jeff Almond, industry manager, snack food packaging, Heat and Control. “Another issue is there typically needs to be some case consolidation, which is difficult for some companies to rationalize. There also needs to be tighter corrugated specs for automation, and it takes time to work through those changes. Also, some snack producers don’t run multiple shifts, which is typically needed to get a good R.O.I. for automation. Lastly, they may not have the packaging efficiency to leverage automation.”

Despite the new options, slow production rates in semi-automated bakeries make it difficult to justify such investments in automation, especially if they don’t meet their internal budgetary criteria.

“If production speeds are low, it can be difficult to achieve a quick R.O.I.,” noted Rick Gessler, vice-president of engineering, Delkor Systems, Inc. “Small, single-shift operations may struggle with meeting a reasonable time-frame for payback as well.” 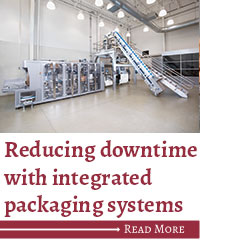 If there are multiple people on the case-packing line, Mr. Sinicrope observed, operations likely will realize an immediate benefit in labor-cost reduction with either fully or semi-automated case packing, which often offsets initial capital equipment costs.

Specifically, Mr. Buckley recommended, look at the number of employees who are hand-erecting, loading and sealing cases and how effectively they are doing it.

As a rule of thumb, he suggested a semi-automated system might be best if only one employee per shift collates products and loads them into cases while one or two other people erect and tape seal them. Making a strategic investment in case erectors, sealers or other equipment not only reduces repetitive work but also provides some level of product inspection.

The extent of automation also depends on the production model.

“If a producer has a lot of short runs with a variety of case sizes with different closures, it is probably better for a semi-automatic approach,” Mr. Almond said. “Those that choose to fully automate usually have been through the case consolidation exercise, have long runs over multiple shifts and are able to leverage their packaging capacity.”

Almost everybody agrees that space is the final frontier when it comes to automating the packaging department, especially in older facilities.

“Real estate and availability of floor space are two of the first few parameters that come into play,” Mr. Roos said.

Based on the facility’s setup, size and layout, bakers and snack-makers will need to evaluate the viability of a fully automated vs. semi-automated case-packing line. Another consideration involves production capacities and market requirements.

“Manufacturers that are struggling to meet the demand for their products are often more likely to opt for a fully automated solution as it allows them to increase production outputs without having to install additional lines or expand their existing facilities,” Mr. Roos noted.

Typically, Mr. Sinicrope said, bakers should work with suppliers to develop a cost/benefit analysis to determine which equipment options are best. Otherwise, they can rely on PMMI, The Association for Packaging and Processing Technologies, to calculate their costs for projected improvements. He pointed out that PMMI OpX Leadership Network developed a total cost of ownership for packaging and processing machine guidelines to assist food and equipment manufacturers in determining the R.O.I. on their proposed investments.

A case in point

Mr. Buckley suggested that the foundation for R.O.I. involves calculating labor rates and number of shifts, but bakers should add their inability to hire and retain hand-packers as well as ergonomic and repetitive motion injuries into the final equation.

Keep in mind that the size of the case could directly impact line efficiencies and play a determining factor in the ultimate R.O.I. Mr. Buckley said larger 12-count cases generally require multiple employees to pack those items into tight-fitting boxes.

Don’t forget how the performance of downstream equipment influences the overall effectiveness of a fully automated operation.

“In a lot of older factories, baggers can create bottlenecks that prevent manufacturers from maximizing the potential of automated case packing,” Mr. Roos pointed out. “It’s important to look at the bigger picture and consider upgrading to a fully integrated bagging and case packing solution.”

“Although this may not create significant savings in labor costs, there are benefits in improved employee safety and reduced liability by removing this manual process,” Mr. Sinicrope said.

With case packing, times have certainly changed in a way that trends toward more gains than pain in the long run.

This article is an excerpt from the September issue of Baking & Snack. To read the entire feature on case packing, click here.