Is sourdough experiencing a resurgence?

Sourdough may still conjure up images and aromas of San Francisco bakeries, but the Bay-area’s famous bread has made fans around the world for reasons beyond its signature flavor notes.

Baking companies have realized the potential of sourdough in recent years as a way to differentiate themselves. According to Mordor Intelligence, the global sourdough market is forecast to register a compound annual growth rate of about 6.9% through 2023.

The surge in popularity of fermented products also may feed the growth of sourdough. From craft breweries to the proliferation of kombucha products and a focus on digestive health, sourdough has an opportunity to capture those same consumers but with bread. The fermentation process necessary to make this bread blends two significant food trends: the demand for natural products and health benefits.

Fermentation naturally provides a clean label without the need for artificial additives and preservatives. According to a 2017 survey commissioned by research firm Ingredient Communications, 73% of consumers said they are willing to pay more at retail for products made with ingredients they trust and recognize. Fermentation’s health-related benefits are also widely accepted as these types of foods contain enzymes, omega-3 fatty acids, probiotics and vitamin B.

These trends, combined with sourdough’s recognizable flavor profile, has led to the development of something younger generations are craving. According to GlobalData, a recent survey found that 49% of millennial and Generation Z like to try new and unusual flavors.

Sourdoughs are highly digestible and may help consumers with yeast, wheat and gluten intolerances.

“Sourdough fits that bill while still being a somewhat neutral carrier for a variety of sandwiches and other applications,” she said. “In addition, sourdough is a bread that’s commonly associated with the fancy toast trend.”

The options don’t end with a piece of avocado toast, and as gluten-sensitive consumers search for alternatives, it also offers a more digestible type of bread.

San Francisco sourdough originated during the Gold Rush of 1849 when French immigrants brought traditional breadmaking methods with them to California. Even today, the popularity of the product in San Francisco alone is illustrated by the fact the bakers in the city produce 3.5 million sourdough loaves each week, according to Mordor Intelligence. The bread is stretching its legs, however, as bakers around the world realize they can create their own twists on the tangy, zesty flavor profiles, influenced by their region’s climate.

In fact, sourdough is breaking through misconceptions about what it actually is. One misguided notion is that the bread must taste sour, but variables like location, time, temperature and technique of the individual baker create a cornucopia of tastes. Sourdough simply requires lactic acid bacteria, wild yeast and flour. Sour notes are not a necessity, and the world is taking notice.

The North American and European regions together account for more than 50% of the total share in the global sourdough market, according to the 2018 “Global Sourdough Market” Mordor Intelligence report. Western European countries, like the U.K. and Germany, are major contributors to the growth of sourdough products, and many of them feature a milder sourdough flavor.

“However, the market is expected to grow immensely in other regions, such as Eastern Europe and Asia-Pacific countries such as China, Singapore, Malaysia and India,” the report stated. 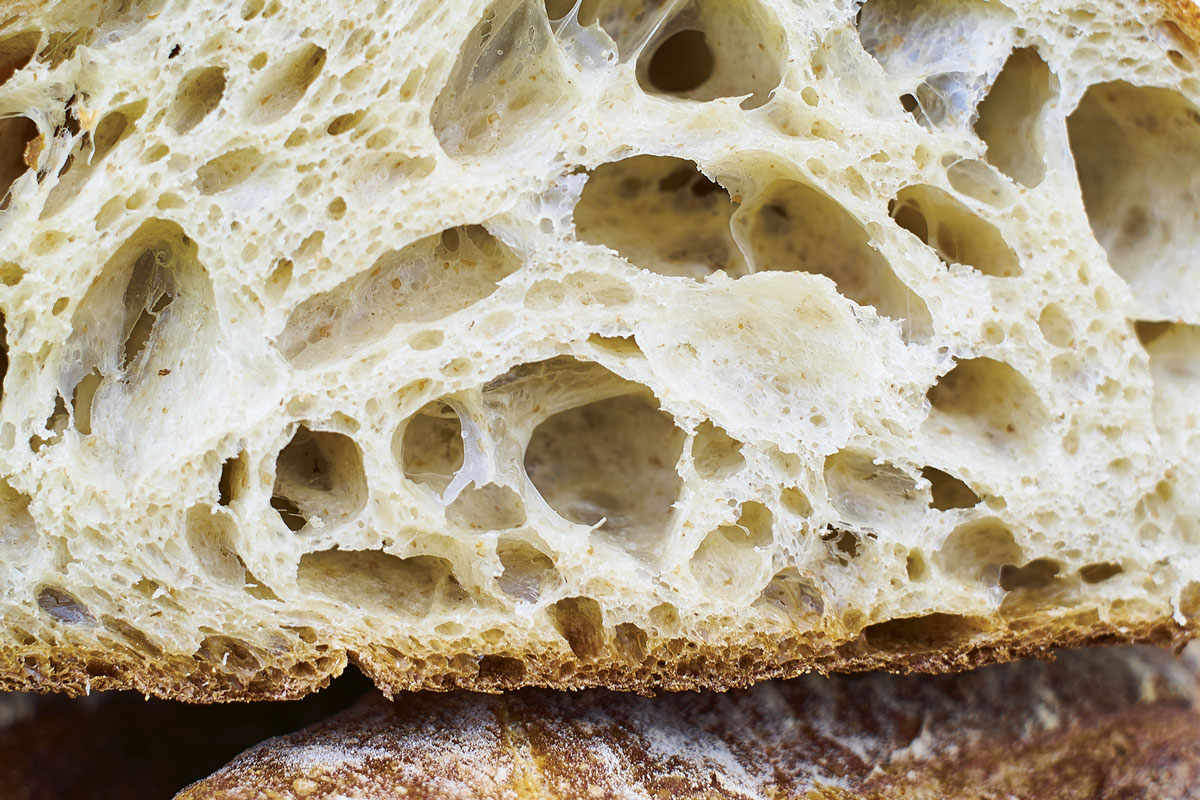 And, despite the massive popularity of the product in San Francisco, Europe accounts for the largest share of the global market with 35%.

“In these regions, consumers are constantly looking for healthier product options, due to their progression toward healthier lifestyle,” the report explained. “The increasing number of artisan bakeries is also a factor boosting the market growth for sourdough in developed regions.”

In fact, the world heritage sourdough library is housed at Puratos’ Center for Bread Flavor located in the Ardennes region of southern Belgium. The library was launched in 2013, and new sourdough cultures are collected each year from around the world. Every year Puratos extensively studies the sourdoughs of a specific region.

Morabito Baking Co., Norristown, Pa., was identified by Mordor International as a leading sourdough producer. According to the company, founder Michael Angelo Morabito brought a San Francisco sourdough starter to Pennsylvania in 1962, and today, the company supplies sourdough bread and other products to food service and retail locations along the East coast.

The push toward stronger flavors in bread is a recent phenomenon. A few years ago, Ms. Powell said Alpha Baking noticed consumers were gravitating toward sourdoughs that were nearly indistinguishable in flavor from white bread.

“Those days seem to be over,” she said. “We are actually seeing a demand for a stronger, more intense sourdough taste.”

Over the past year, Alpha Baking’s frozen food service division alone saw an 8% increase in sourdough sales. The baking company makes a variety of sourdough products from traditional loaves and pan bread to ciabattas for food service and retail.

Rising preferences for sourdough bread also may be attributed to the health benefits associated with them. Sourdoughs are highly digestible and may help consumers with yeast, wheat and gluten intolerances.

They also offer an alternative to gluten due to the breads’ low glycemic index. Much of the digestive discomfort and bloating consumers experience comes from the phytic acid in wheat, but in sourdough products, the wild yeast and lactobacillus in the leaven neutralize the phytic acid and make products easier to digest. 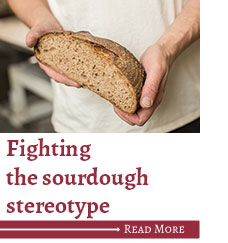 One San Francisco-based company, Bread SRSLY, has taken sourdough to another level and made it entirely gluten-free. The company offers Classic Sourdough, Seeded Sourdough, Sweet Onion Sourdough sandwich and dinner rolls, and a Sourdough Pullman. Bread SRSLY baked foods are also free of preservatives, egg, dairy, nuts and other allergens. The bread is shipped nationwide and sold in retailers and foodservice locations along the West coast.

Interest in sourdough’s ability to aid consumers with gluten sensitives is piquing. In 2018, the Alberta Wheat Commission and Saskatchewan Wheat Development Commission in Canada along with the Minnesota Wheat Research and Promotion Council, initiated a research project to determine whether the process used to produce sourdough bread could lead to a more easily digestible bread for individuals who are sensitive to wheat.

Led by Michael Gänzle, Ph.D., food microbiologist at the University of Alberta, the project is investigating the sourdough bread fermentation process that breaks down proteins and carbohydrates in wheat flour that are known to cause wheat sensitivity. Dr. Gänzle’s goal is to better understand whether this fermentation process reduces the adverse effects. He also indicated that using sourdough in industrial baking can reduce ingredient cost and improve the quality of bread.

“There is a lot of anecdotal evidence that sourdough bread is tolerated by consumers with non-celiac wheat or gluten intolerance, but the science is not available to back up these claims,” Dr. Gänzle said. “We aim to determine whether fermentation reduces or eliminates individual wheat components that are known or suspected to cause adverse effects.”

Important to note is that while Dr. Gänzle’s purpose is to create a more easily digestible product for gluten-sensitive individuals, this research won’t create a formula acceptable for the estimated 1% of the population who suffer from celiac disease. No sourdough is unless made entirely gluten free. The study is expected to be completed in 2021.

Crafting a future of healthy bread

Mordor Intelligence projected that sourdough products around the world will diversify, especially ones with whole grains. 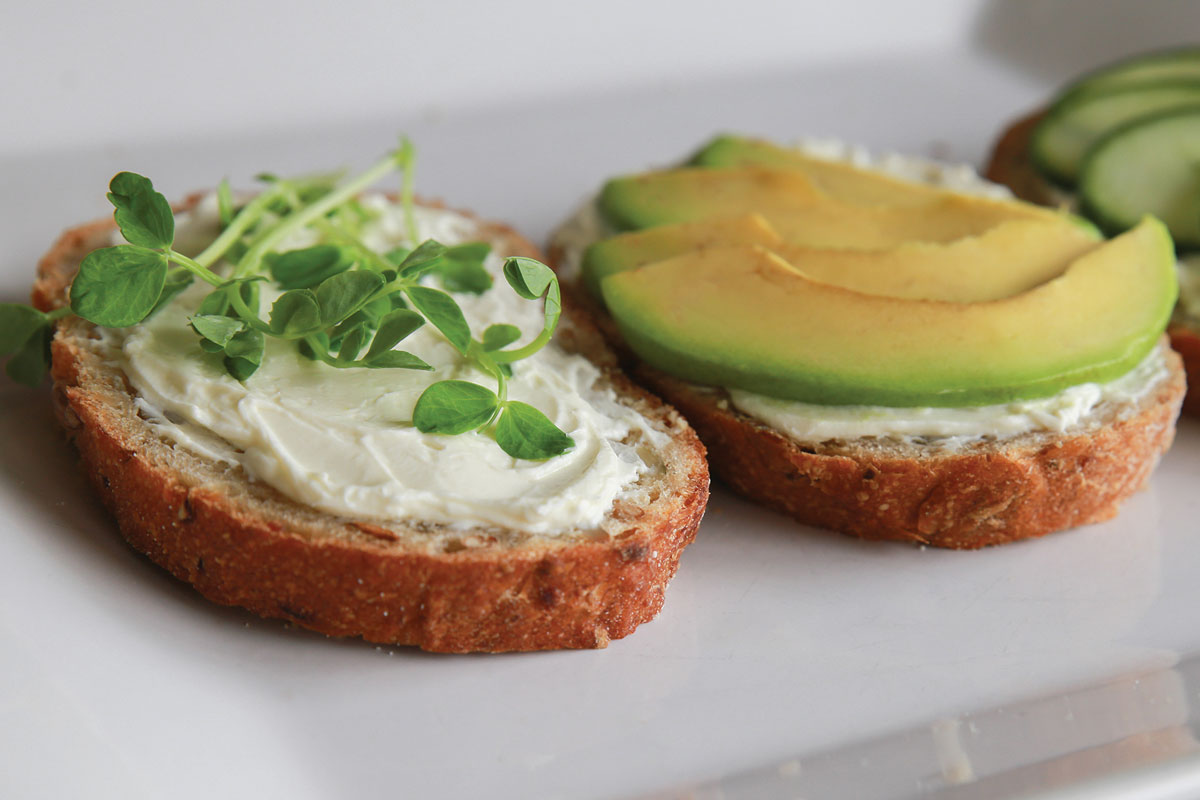 Bread Alone, a Lake Katrine, N.Y.-based bakery, makes Nordic bread, including a 100% sourdough made with whole grains, primarily rye. The Nordic bread line was launched in June 2018, and in November, Whole Foods Market began carrying the bread in its Northeast U.S. locations.

Alpha Baking has seen the rise of sourdough’s popularity in limited-time offerings at food service locations. And the flavors seem to have staying power. The identifiable taste and texture can differentiate bread products in the category, Ms. Powell said.

“For food service, breakfast sandwiches offer a great expansion opportunity,” she said. “And for retail we could see expansion in more buns and rolls.”

The room for growth in sourdough seems boundless. As the science behind the nutritional benefits catches up to the popularity and variety of the flavor, grocery store shelves may soon be packed with local, San Francisco and international options.