We use cookies to provide you with a better experience. By continuing to browse the site you are agreeing to our use of cookies in accordance with our Cookie Policy.
Skip To Content
Home » Bakeries dive deeper into line data to hit operating goals

Rarely does the road to excellence travel along a straight line. In addition to the usual bends and curves, the journey undoubtedly encounters occasional speed bumps, unexpected roadblocks and even a dead end that may change the direction of everything that had been mapped out.

John Anthony Orlando, president and chief executive officer at Orlando Baking Co., understood that when the Cleveland-based bakery began its venture to enhance its operations at its 200,000-square-foot plant two years ago.

Initially, the continuous improvement program pushed efficiency by monitoring key performance indicators (KPIs) on its nine specialty bread and roll lines that crank out fresh and frozen products for a host of local and national customers. Instead of using a paper trail, supervisors relied on tablets and smart phones to compare scheduled production vs. how much is produced per pound, as well as waste, changeovers and even unplanned downtime.

While it was tracking the proper metrics, the production team just needed to do it differently to get better results. For Mr. Orlando, that meant putting the process into overdrive.

“Before, we looked at performance by shift,” he said. “Now we’re diving deeper down by the hour. Prior to installing this system, if we had a bad day, it was bad one altogether. That bad day would keep on going and going. Today, if we’re having a bad hour, we can turn it around and make a bad day a good one.”

To execute that transition, the bakery began daily huddles with employees on all lines and every shift to determine root causes of problems and follow up on production issues, said Ken Stiffler, director of operations who spearheaded the new initiative.

Then to create ownership on the floor, supervisors posted hourly performance indicators on boards throughout the plant.

“We put them up in an area where all the people on the line can see how they are performing that hour,” Mr. Stiffler said. “It’s like going to any game, whether it’s baseball, football or basketball, and not knowing the score. By putting it up on the wall, everyone knows.”

That awareness then sparked a greater sense of urgency.

“By reporting it hour by hour and having it in front of their faces, it allows them to react to the situation and change the rest of their day instead of just reporting the news at the end of the day,” Mr. Stiffler explained.

And operators don’t have to read the exact number. They know how the line is running by noticing what color it is.

Overall, using KPIs to gauge production is more complicated than measuring how fast a line is running.

“As you can imagine, there are hundreds of performance indicators out there, and all the acronyms can be impossible to remember,” observed Rowdy Brixey, president, BEST: Brixey Engineering Strategies & Training.

Most plants rely on operating equipment effectiveness (OEE), which measures how well a piece of equipment or system works compared to its full potential. However, Mr. Brixey has a few favorites.

One acronym, LBPM-D, stands for “pounds per manhour for direct labor.” To determine this KPI, one can total the gross production pounds for products made on a line by week, month or another period. Next, divide this number by the total payroll hours for the direct labor responsible for manufacturing those items during the same timeframe. 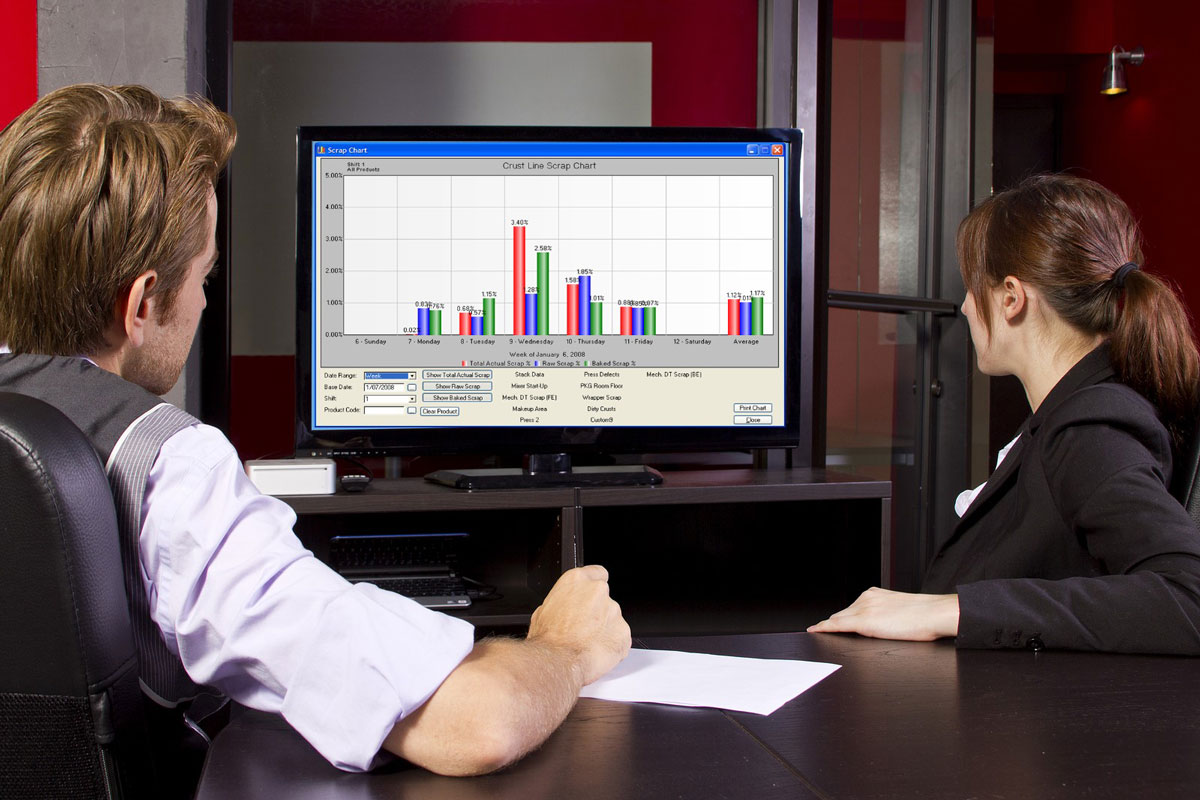 “This KPI will show whether you have extra personnel on the line compared to its historical run rate,” Mr. Brixey explained. “This format can also be used for measuring total plant or any indirect labor. Trending these numbers can really uncover opportunities for reducing overhead and increasing margin.”

Another acronym is YOY CPLB. After calculating “year-over-year cost per pound” for a specific time period, one can adjust for inflation, raises, utilities and other variables the operations team typically can’t control. Then one can compare the year-over-year numbers based on waste, scaling, downtime, overtime and other controllable factors.

“Look at ‘cost per pound’ versus ‘cost per unit’ because it eliminates factors like loaf size and bake times,” Mr. Brixey advised.

Long and short of it

Such analysis of key data allows bakeries to take a proactive approach in refining their operations. On the production floor, however, line efficiency can quietly creep beneath acceptable thresholds set by the bakery. Crunching such KPIs in real time provides line workers with the tools to take immediate corrective action, even if it’s a band-aid solution, said Bob White, president of Focus Works.

“The best [system] is having alerts when numbers reach warning levels such as 85% efficiency,” Mr. White said. “You have to realize that you start at 100% efficiency, and as the day wears on, it can only decrease because there’s no making up for lost time and material.”

From an automation standpoint, real-time dashboards give production supervisors and managers the visual tools to continuously monitor their KPIs and where they are trending, noted Matt Lueger, vice-president of sales, NorthWind Technical Services.

“They tend to want their data instantaneously, in a snapshot, through their smartphone or tablet,” he said. “Though (KPIs) may differ slightly from customer to customer, the big ones that people ask for are production totals, estimated scrap, total yield and energy usage.”

However, bakers need to analyze all information with a proper perspective.

“Depending on when they look at it, those same ‘real time’ dashboards can be misinterpreted at first,” Mr. Lueger pointed out. “Benchmarks are typically derived over a long time period, so comparing real-time data to benchmarks can sometimes be scary. If your data window isn’t wide enough, say during a line startup when scrap is higher, the numbers can be pretty misleading.”

That’s why Orlando Baking picks 85% as its realistic performance production efficiency goal, whether it’s measured in pounds of product or cases packed.

To accurately monitor waste, for instance, Orlando Baking tracks it not only per hour but also per shift.

“Let’s say our goal is 50 lbs or less waste per hour or up to 400 lbs per shift,” Mr. Stiffler noted. “If production employees run 49 lbs of waste per hour, they would all be green. But let’s say they ran 100 lbs of waste on the last hour; they’d be green all day except for the last hour, and unfortunately at that point, they would be over for the shift. The total number then would be red.”

Mr. White cautioned that data can be misinterpreted and the problem misunderstood. For example, the information may indicate that downtime was caused by equipment failures when it was really the result of the cost of unexpected maintenance per piece of equipment. Or there may be other reasons for underperformance.

“The causes of downtime and waste are not always clearly defined,” he said. “The question should be, ‘Were the causes equipment-related or quality-related?’ You can’t reduce downtime if you can’t get to the root cause.”

At Orlando Baking, pre-shift huddles establish awareness about what potential issues might occur and how to prevent them.

“Where we’re at right now is driving efficiency against our standards and then making sure that ownership is there,” Mr. Stiffler said. “And every hour, we’re promoting the teams to dig deep, identify root causes and come up with action plans to make the lines run better than they were prior to that.”

That said, keep in mind that over-analysis can lead to paralysis, especially if management teams do more talking than walking.

“Many inefficient operations hold meetings more frequently as things worsen but fail to truly identify root causes or set strong expectations and accountability to get problems fixed,” Mr. Brixey said. “Get out on the production floor more, and you might be surprised what you can discover.”

Unearthing the root causes of unexpected downtime can help identify and justify capital investments to enhance productivity and bolster yield in the long run.

“We find a lot of production teams that consider unplanned downtime to be unavoidable or just a maintenance problem,” Mr. Lueger said. “The data is there to tell you why and how often your plant is down due to failing or improperly used equipment. If you find the windows of downtime, you will find either a good opportunity for preventative maintenance or an opportunity to retrofit a piece of your system. Both are low-hanging fruit for increased production.” 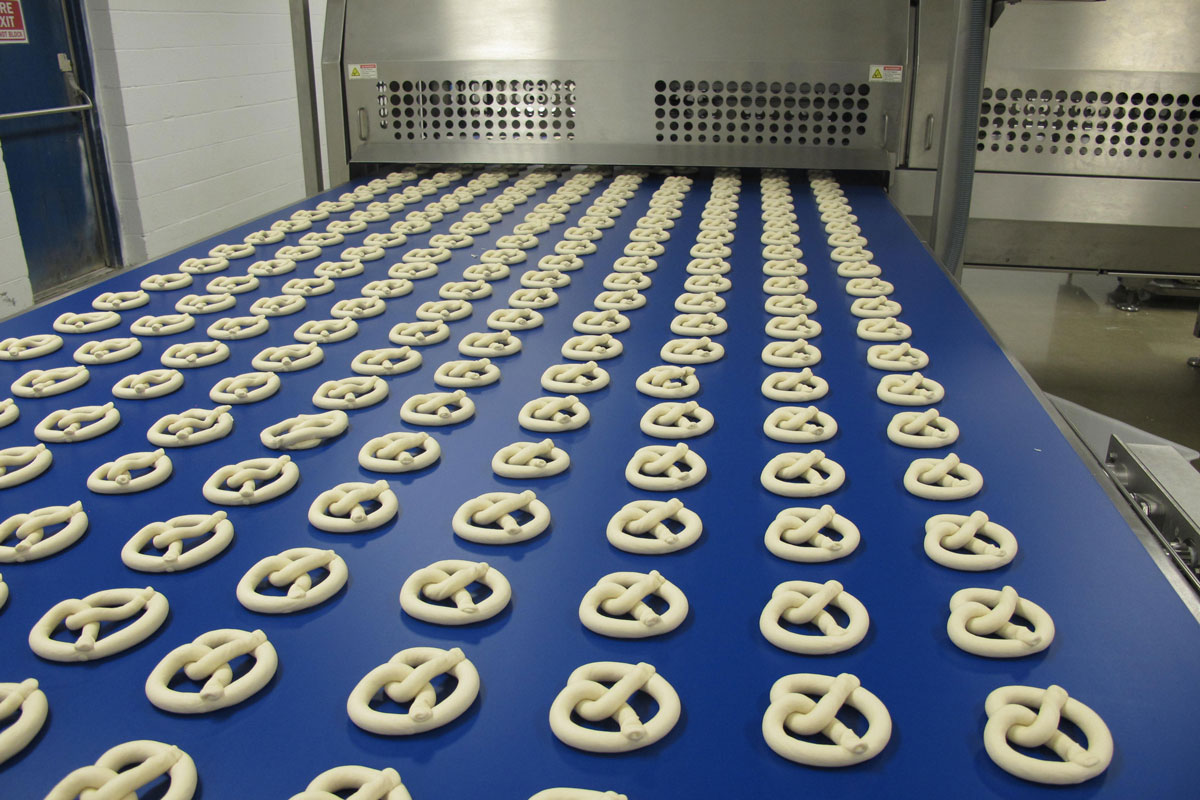 Orlando Baking is harnessing its data to develop a potential shopping list for the International Baking Industry Exposition (IBIE), which will be held Sept. 7-11 in Las Vegas.

“OEE tells us about our overall equipment effectiveness, and where we should expand,” Mr. Stiffler said. “If we needed to expand production in our plant, it allows us to focus in on how to do that to free up more space and time.”

For identifying specific investments, Mr. Brixey recommended using a capacity report that pinpoints bottlenecks. First, calculate the maximum run rate on each piece of major equipment to discover the lowest limiting factor for each product variety or pan.

“The best returns usually come from focusing on the items with the highest volume,” he noted. “Most times you’ll find that plants have slowed down their lines to make running easier versus fixing troublesome equipment.”

Capital projects with significant returns often come from replacing one piece of equipment or a couple of assets that drastically limit the line’s throughout by performing well below that of many other machines.

“The capacity report and bottleneck findings can lead you to a strong understanding of whether you need to replace select assets or the entire line,” Mr. Brixey explained. “Having this report completed in advance of IBIE can help you maximize how you spend your time while in ‘the land of plenty.’”

Taking everything into consideration is how to maximize efficiency and attain peak performance over the long run.