We use cookies to provide you with a better experience. By continuing to browse the site you are agreeing to our use of cookies in accordance with our Cookie Policy.
Home » How HighKey developed the top-selling bakery product on Amazon

How HighKey developed the top-selling bakery product on Amazon

A quick look at Amazon’s best-selling bakery products reveals the usual suspects — Grandma’s Cookies, Double Stuf Oreos, Chips Ahoy! — but sitting at No. 1 is an unlikely contender: HighKey Mini Cookies. Launched only six months ago, this brand has made a name for itself by strategically tapping into the needs of ketogenic dieters and diligently tracking consumer feedback on its products.

Co-founded by former Moon Cheese chief executive officer John Gibb and a private business partner, HighKey initially was going to be a low-carb, protein-rich brand, but the duo wanted a product that was differentiated in the marketplace. It was after Mr. Gibb learned about the ketogenic diet his partner was on that the concept was quickly altered.

“The more I learned about the keto diet, its popularity and the problems consumers were having in the marketplace, such as not finding delicious solutions to their favorite products, led us to believe that we could solve some of those problems,” Mr. Gibb said. “So, the question I asked my partner was, ‘What do you crave the most that you can’t have on your diet?’ He said, ‘I want a really good chocolate chip cookie.’”

Creating an appetizing cookie that meets keto requirements is no easy task. The diet requires participants to limit carbohydrate intake to 50 grams per day while encouraging a higher consumption of fat and protein. Before HighKey began formulating Mini Cookies, it looked at keto communities online to see what consumers were saying about current offerings within the segment.

“Our R.&D. begins with us establishing demand in the marketplace and really trying to understand what people are looking for,” Mr. Gibb explained. “They can give us very specific feedback, or we will look at competitive products and analyze what they are missing and why they are not fulfilling needs that the marketplace is screaming for.”

From cookies to breakfast staples, the company noticed that consumers were having trouble finding traditional items they had enjoyed before they began the keto diet. HighKey also zeroed in on the demand for products free from preservatives and artificial ingredients.

“We began with the idea that we would design things with simple ingredients,” Mr. Gibb noted. “We were trying to create a product with as few ingredients as we possibly could. That became both a design challenge and a great product strength.”

Finding functional ingredients was one of the company’s most pressing obstacles during the product’s development.

“The ingredients we use are always a challenge because they are high priced,” Mr. Gibb said.

In addition to costs, the bakery had to ensure that the high percentage of fat in the cookie wouldn’t lead to shelf life issues.

After nearly a year of testing various formulations, HighKey achieved the flavor and texture it was aiming for by using almond flour, natural sweeteners, coconut oil and butter among other ingredients to create Chocolate Chip Mini Cookies, which contain 2 grams of net carbs, 13 grams of fat and 3 grams of protein for six cookies.

The company first rolled out the product on its web site and Amazon. This method played well with keto followers who are used to finding new products online. HighKey further supported the launch through social media efforts and by teaming up with core influencers such as Brandon Carter, who has more than 1.5 million followers on Facebook.

The initial response to the cookies was positive and created a strong following for the brand. HighKey’s sales were able to quickly grow through a grassroots referral system that created a buzz around the product and built consumer trust. 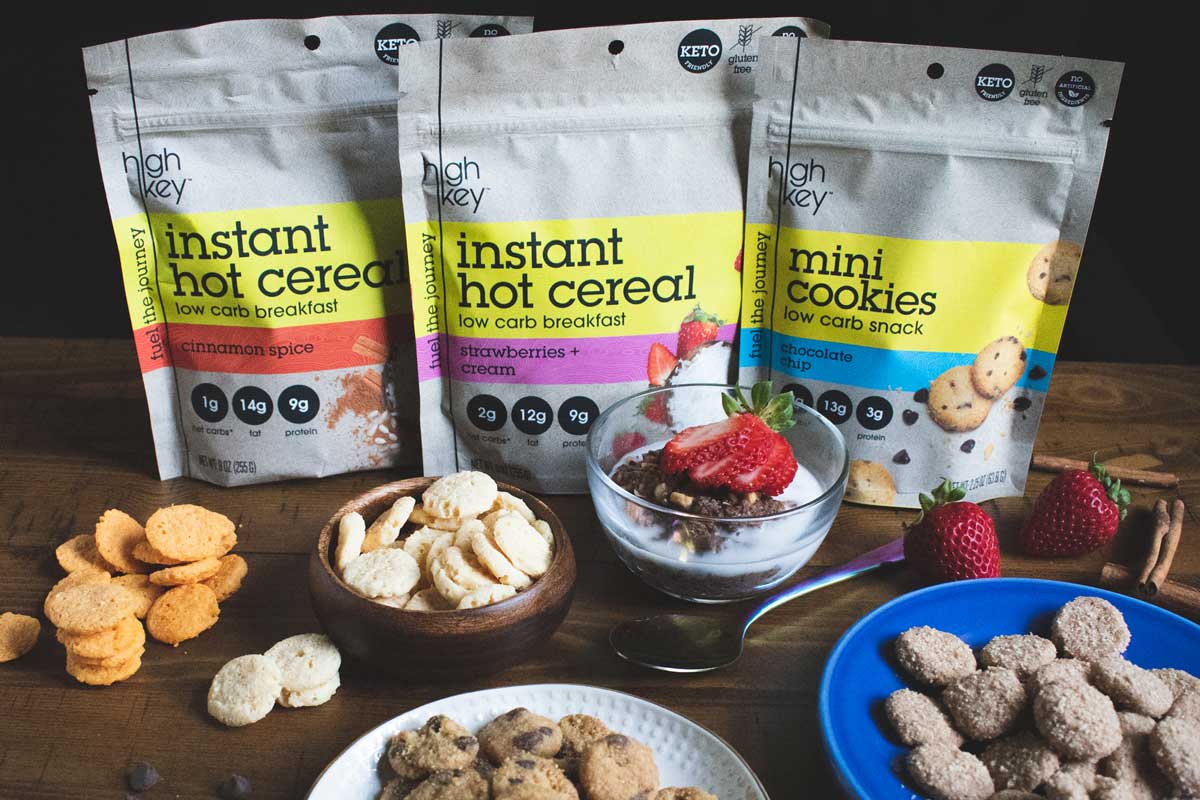 With demand soaring for the cookies soon after the launch, the business had to be cautious about scaling up too quickly.

“We had to suppress production of new flavors because of capacity at the manufacturing plant we use,” Mr. Gibb explained. “Our ability to sell new flavors in the product line exceeded the facility’s ability to add capacity, equipment, lines and train people, so we had to be careful. In past lives, I would have been tempted to go faster and broader. But because of our circumstances right now, we have the luxury of doing it the right way.”

The company originally wanted to launch Mini Cookies in three flavors but ended up launching only one. It eventually introduced a Snickerdoodle variety but is withholding further rollouts until it can bring on additional capacity. To avoid this issue in the future, Mr. Gibb has been working with manufacturers to bring on new equipment that can automate certain areas of production.

This level of flexibility and patience has allowed the company to track the cookies’ performance and understand growth points before scaling up with retailers such as Whole Foods, where the cookie will soon launch in the southwest. As the brand grows, it hopes to find a place in other grocery store chains that focus on specialty and natural foods.

Since rolling out Mini Cookies this year, HighKey also has unveiled other keto-friendly products such as Instant Hot Cereal, Cheese Crunch, Nut Butter and sugar substitutes. These introductions largely have been driven by consumer requests and comments online.

“We use a lot of the feedback we get on social media as well as customer service channels to help guide the direction we are going,” said Morgan Shepard, director of public relations and influencer marketing, HighKey. “When it comes to product development, I know that we want to survey our consumers to figure out how our products are being used in their lives and what sort of items they are looking for.”

With its core audience established, the company hopes to slowly expand into other consumer bases that favor low-carb lifestyles.

“We think that there is a tremendous amount of growth possible for us,” Mr. Gibb said. “Introducing our products into retail is the next phase and focusing on only the best products at retail is the wisest thing for us to do.”