Cooling a batter or dough can sometimes require incorporating a refrigeration system that can pump chilled water or coolant to the jacket of a mixer. But that’s only one piece of the puzzle. There are critical aspects to the mixer’s design that play a role in how efficiently the cooling system will work.

AMF Bakery Systems takes cooling into account with its mixer design, especially for surface area of the bowl.

“When it comes to refrigeration, it’s the amount of surface area to cool the dough that’s important,” said Terry Bartsch, executive product manager, dough systems, AMF. “The baker knows he needs a glycol system to run as a medium through the mixer’s refrigeration jacket, and we’re here to assist bakers with the calculations to size the system properly.”

AMF touts effective bowl sheets, bowl ends and breaker bars that can be jacketed for refrigeration.

It’s also important that the bowl sheet isn’t too thin that it creates deflection and loses strength. It is also important to have a strong refrigeration jacket design, such as the AMF DuraBowl, Mr. Bartsch added. Additionally, the shape of a mixer’s tools plays a vital role in heat management.

“The shape of the tools has a significant impact on the heating of the dough,” said Dominique Denoël, chief executive officer, VMI, noting that the company’s KNEADSTER was designed with a double tool specifically to limit the temperature rise without sacrificing dough quality.

On the Shaffer, a Bundy Baking Solution, standard tilt-bowl mixer, bakers can rely on a refrigerated jacket and optional refrigerated bowl ends and a breaker bar that can also be refrigerated if needed. The company can also offer its patented refrigerated agitators in its mixers.

“You have tools that use refrigeration to take the heat out of the dough as it’s being mixed,” said Andrew McGhie, director of sales, Shaffer.

The refrigeration is programmable so that the baker decides at what point in the mix and for how long the tools need to be cooled. By programming on time rather than temperature, bakers can efficiently control when the heat needs to be removed from the dough, which also takes the pressure off the cooling system.

In the old days, “dough heads” would recognize the telltale signs of an overheated dough just by its look and feel. But in today’s era of automation, WP Bakery Systems makes the mixer operator’s life a bit easier with its Kronos Digital technology, which can control parameters such as supplied energy, dough stiffness, dough momentum, viscosity, filling level and, of course, temperature.

“We can control all these critical parameters, and we can control the complete mixing and kneading process to bring a consistent dough to every mix,” said Patricia Kennedy, president, WP Bakery.

And some mixers are designed to be free from a jacket altogether, such as with Diosna vertical mixers.

“The Diosna Wendel Mixer does not need a cooling jacket because of the unique mixing technique,” said Ronald Falkenberg, master baker and sales and application manager, Diosna USA and Canada.

When Topos Mondial designs its mixers, it keeps three things in mind: mix time, energy imparted and temperature. And the company believes that with a careful mixing process, jacketing is not called for.

“If you knead the dough right, you don’t need all that chilling,” said Damian Morabito, president, Topos Mondial. “If you don’t make the dough hot, you won’t need to chill it; if you don’t heat it up in the first place, you don’t need to worry about cooling it down. We’re kneading — stretching and folding — and doing what the mixer should do: develop the gluten. You don’t have to beat it up to get it really hot because when you do that, you’re killing the yeast.”

Similarly, WP Bakery mixers are designed without the need for a cooling system.

“WP Kemper is not using cooling systems,”
Ms. Kennedy said. “Our mixers are working with temperature sensors, so there is no need for cooling because we are not fully enclosed or going to those high speeds.”

Zeppelin’s Codos continuous mixing system has a dough trough with two screws running through with an open atmosphere across the top while the jacketed surfaces are unexposed to air, which eliminates risk for condensation.

“When we are running, the dough-facing surfaces of the mixer are all jacketed,” said Joe Cross, engineering and process manager, Zeppelin Systems USA. “And because of the way it’s shaped, the surfaces are also constantly covered with the dough being produced. That results in efficiency with the mixing process, and 100% of the friction wall that heats the dough is being cooled and being used for thermal transfer.”

This design also leads to an efficient thermal load, which results in smaller requirements for cooling compressors. 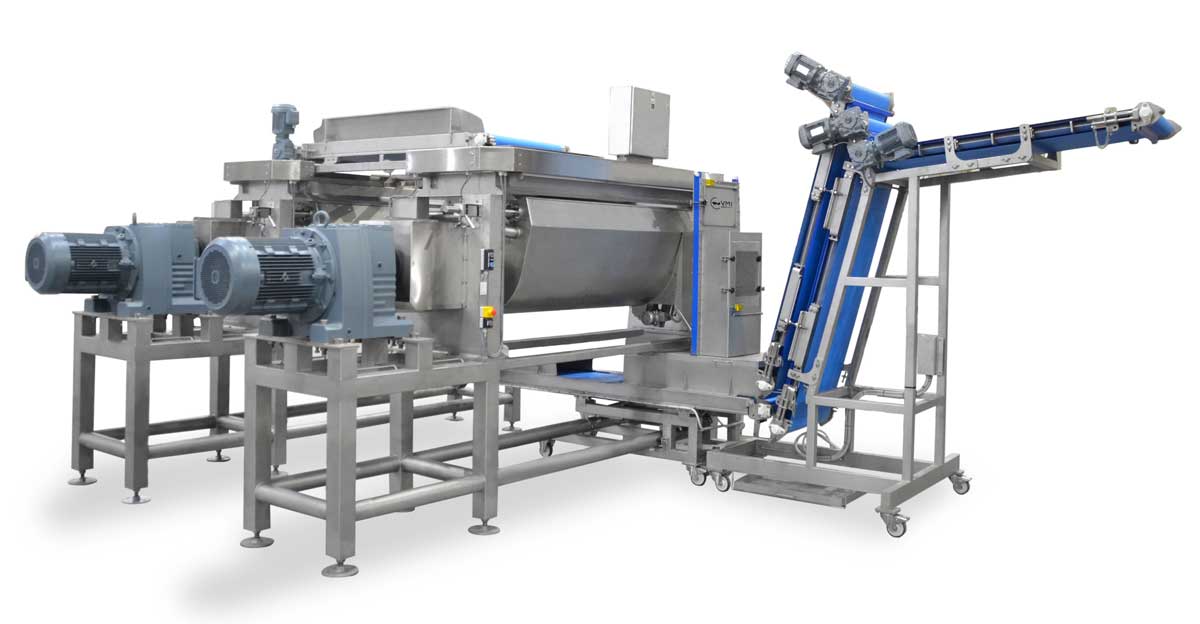 When equipment design ensures an efficient mix, a cool batter can be a natural byproduct.

“In other words, the batter is not inside the mixing head very long, just by the nature of internal volume,” said Bob Peck, vice president, E.T. Oakes Co. “Based on the design, the resident time is short, so we create less heat.”

“These are very efficient,” Mr. Peck noted. “They’re designed to get a good transfer from the cold water or glycol to the mixing of the batter. By scraping the surface, you get a much better heat transfer of the cooling water to the batter, and then you can cool it down even further.”

Ultimately, the mixer design should be the result of collaboration based on the product needs and bakery setup.

“In most industrial bakeries, the systems are designed around having a dough temperature within a specified range,” Mr. Cross said. “Whatever the ideal ­temperatures are, that’s how the equipment is designed from the very beginning.”

Controlling temperature during the mixing stage is easier with monitoring systems.

VMI mixers come equipped with a probe and control panel to measure and display dough temperature before, during and after the mix.

“This temperature can be automatically regulated by using a double-jacket bowl,” Mr. Denoël said.

The company’s continuous and horizontal batch mixers can use their jacketing feature to adjust the temperature when it measures too high.

[Related reading: Mixers engineered to stand the test of time]

At times, such as with some batters, a minor heat increase might not hurt. But with others, the mixer might need a bit of help to keep it under control.

“If the batter is sensitive to temperature rise where it could affect the aerating, we offer a glycol system where we can circulate either chilled water at 50°F, 40°F or anything above freezing,” Mr. Peck said. “Or we employ the same system and use glycol and get it down to 20°F. And by doing that, we can offset most of the heat from mixing.”

With Exact Mixing equipment, the temperature is programmed into the process.

The act of mixing is not complicated, but thanks to the science of baking, controlling the temperature might not be so simple. But with a mixer designed with the right tools and systems to meet the specific needs of the product, bakers can keep their cool throughout the process.

This article is an excerpt from the September 2020 issue of Baking & Snack. To read the entire feature on mixing, click here.