We use cookies to provide you with a better experience. By continuing to browse the site you are agreeing to our use of cookies in accordance with our Cookie Policy.
Home » Unique Snacks takes a one-of-a-kind approach to a broader market

Don’t blame the Spannuth family for trying something different. Why shouldn’t they? Ever since the bakery accidentally overproofed a batch of pretzels decades ago, the biggest key to the company’s long-term success has involved making that same old mistake over and over— much to the delight of its loyal consumers.

In fact, those split-open pretzels, initially marketed as the “mistakes” that they were, are now popularly known as Original Splits and remain the top-selling item for Unique Pretzel Bakery along with its Extra Dark Splits (which are baked too long on purpose) and hollow Shells, which are just the outside crust of the pretzels.

And now, for something completely different. On the eve of its 100th anniversary, which is February 11, 2021, the Reading, Pa.-based company is hitting the refresh button with a rebranding initiative to better position it for future growth.

In addition to rolling out new packaging and an updated logo, the family business just tweaked its brand name to Unique Snacks.

The goal, noted Justin Spannuth, vice president and chief operating officer, involves setting the stage to attract potentially broader opportunities by venturing — either as planned or by accident as in the past — into other segments of the snack food industry.

“As we are making new products, we are opening ourselves up to be the brand of Unique Snacks that goes beyond pretzels,” he said.

[Related reading: Company makes pretzels in its own ‘unique’ way]

The targeted, multifaceted marketing campaign also will explore other channels and expand its geographic reach.

Nationally, the snack producer supplies several large retailers and “natural food” chains and seeks to grow its presence in convenience stores, drug stores and a greater number of traditional retailers. It also plans to expand its product line beyond what it currently offers.

“We’re really positioning our brand in consumers’ and buyers’ eyes as a real brand, and not just a few SKUs on one of shelves in the natural food aisle,” said Justin Spannuth, whose father William J. Spannuth is president and brother William P. (Bill) Spannuth serves as vice president and chief financial officer. “We want to be a significant portion of the pretzel space and, eventually, of the snack space as we innovate with other products.”

What makes Unique Snacks so different is its ability to play in the “natural food” segment and the overall retail channel with its line of classic pretzels.

“We play with every animal,” Justin Spannuth said. “We have DSD networks in our own backyard and are getting a lot of growth through national, natural food distributors. We’re a very popular brand because we fit in the segment of natural, but we’re a high-volume-turning standard, salted snack.” 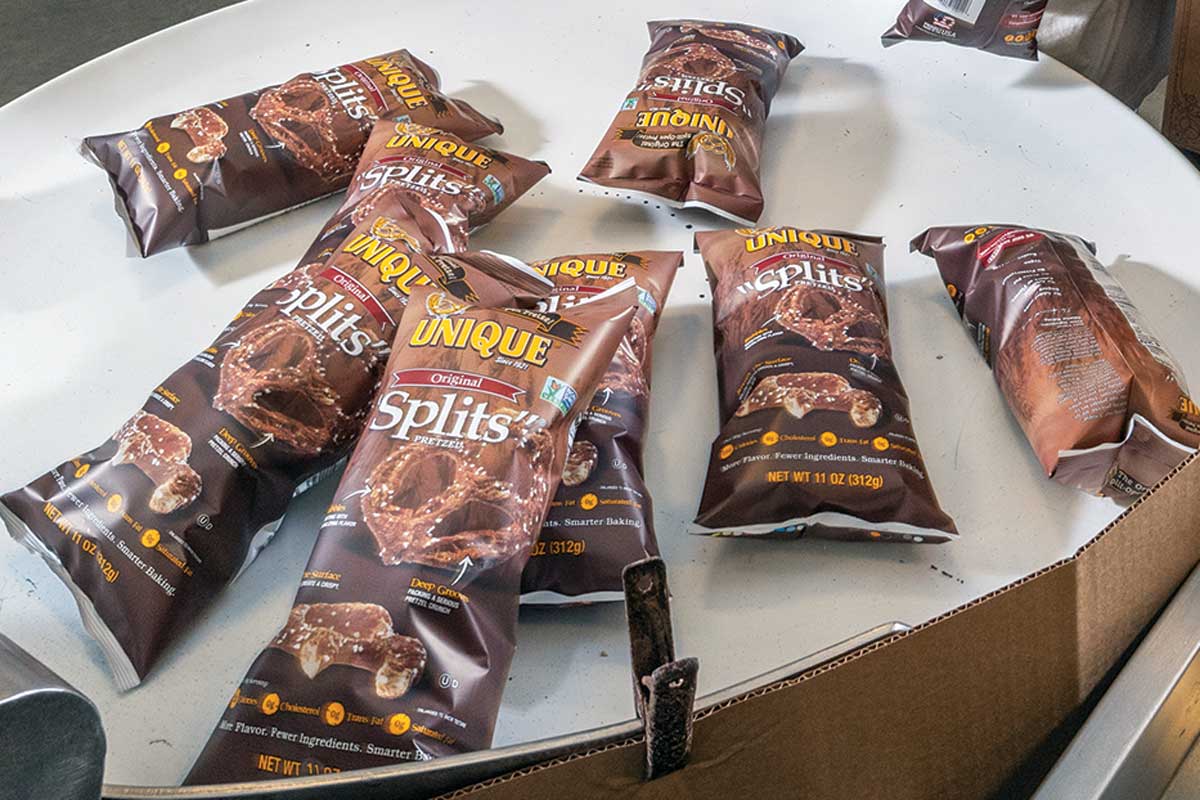 Its slogan of “More Flavor, Fewer Ingredients, Smarter Baking” highlights its products’ clean labels and a commitment to extended fermentation where time becomes an essential ingredient to the overall process.

“There are only two factors left when you don’t put any extra ingredients into the product — just process and time,” he explained. “That’s the trick to baking. It’s all in the proof and how you handle the dough.”

Specifically, Unique Snacks creates the Splits’ distinctive texture and other characteristics just like many bakers do with artisan and sourdough breads. The extra proofing in a high-humidity chamber develops the additional gas bubbles that burst during the baking process to create its namesake appearance while releasing enough internal moisture to develop the snack’s texture.

“Our Splits have a very authentic pretzel flavor,” he added. “It’s a nice, yeasty flavor and crunch that you can’t achieve without having time implemented. In the world of mass production, that’s the only ingredient that most large companies cannot afford — more time.”

The decision to rebrand didn’t happen overnight, but after months of planning, the family knows that time is now on its side.

Nearly a decade ago, Justin Spannuth pointed out, the company decided to switch to a distinctive matte-finished paper bag that created premium positioning for the brand and differentiated it from the sea of traditional clear plastic bags of pretzels that had historically ruled the snack aisle.

“It made us look like a high-quality pretzel, which was in the paper bag,” he said. “We wanted to look like we were selling [premium pretzels]. It really showed us what rebranding and reimagining your company does to keeping your brand fresh as we’re introducing ourselves to new customers.”

The current effort not only coincides with its yearlong celebration of its centennial but also represents its more ambitious plans going forward.

Unique Snacks has begun collaborating with co-manufacturers, planning for its next move. Currently, it outsources production of its milk- and dark chocolate-coated pretzels, as well as its Crunchies that feature an outer shell of chocolate filled with a mixture of peanut butter and textured pretzel bits.

“As we’re growing and our abilities are changing and our relationships within the industry are increasing, the odds of us coming across an incredible opportunity are becoming greater and greater,” Justin Spannuth said.

Currently, he added, the company is sticking to the pretzel game.

“However, we have a few products on the horizon outside of the pretzel world, and you never know when something will come along,” he said. “ I do have some new product concepts in the works, but we have to get through this rebranding initiative first.”

This article is an excerpt from the October 2020 issue of Baking & Snack. To read the entire feature on Unique Snacks, click here.